The Nine Network has claimed ratings leadership as the No. 1 network with the demographics 18-49 and grocery buyers with children.

In the coveted demographic of people 25-54, the Nine Network has tied for first place with the Seven Network. And with people 16-39, less than one share point separated the Nine and Seven Networks.

Across the entire calendar year, the Nine Network is currently leading the year with people 25-54, 18-49 and grocery buyers with children.

Michael Healy, director of television for the Nine Network, said: “With viewers demanding content when and where they want it, the notion of a 40-week television year is increasingly becoming less relevant. From the first day of this year until today, between 6am and midnight, I’m proud to say that the Nine Network is leading all key demographics. Furthermore, since the Olympics finished, Nine has completely dominated, leading all demographics in primetime as well.”

Nine also boasts three of the top five highest rating programs of the year and 20 of the top 50.

Rugby League dominated Nine’s highest rating programs of the year, with the first State of Origin match claiming the title of Nine’s No. 1 program of 2016 with a massive national average audience of 3.946 million (5 City: 2.735 million / Regional: 1.211 million).

The second State of Origin match is Nine’s third-highest rating program of the year with a national average audience of 3.559 million (5 City: 2.424 million / Regional: 1.135 million).

The Block, celebrating an incredible 12th series in 2016, takes out the title of Australia’s No. 1 reality program of the year, enjoying a bumper national average audience of 3.094 million (5 City: 2.205 million / Regional: 889,000) for its Winner Announced segment – an increase of more than half a million viewers on the previous series.

While all Nine’s dramas were enjoyed by solid overnight audiences, the true picture of the success of each can only be accurately measured when all forms of viewing are included.

“But the way they are consuming it has changed rapidly in recent years. Overnight viewing figures are now just one segment of the overall viewing patterns of our audiences. Increasingly, time-shifted data and streaming figures on 9Now, coupled with audiences for our encore linear screenings, give a far more accurate reflection of just how many people are watching.”

Nine News dominated across Australia’s major capital cities of Sydney, Melbourne and Brisbane. On average weekly audience and on average audience across both the calendar and survey year, Nine’s east coast bulletins are No. 1.

Nine’s suite of multichannels offer viewers more diversity than any other network.

“Our multichannel strategy has been carefully designed to offer wide diversity to all segments of the population,” said Healy.

“While our primary channel, Nine, is targeted directly at People aged 25-54, 9GO! is very much skewed towards a younger audience. Programming on 9Gem is tailored towards viewers aged 55+ and our newest channel, 9Life, is geared towards women aged 18-54.” 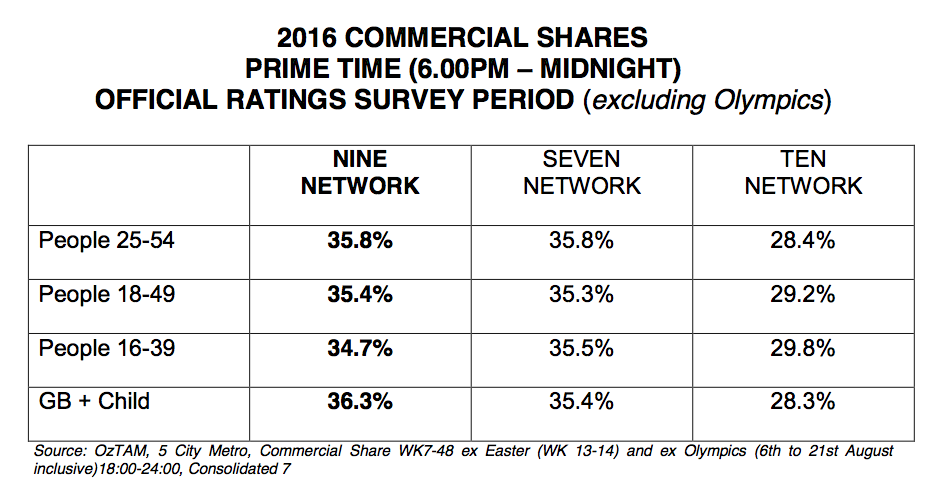