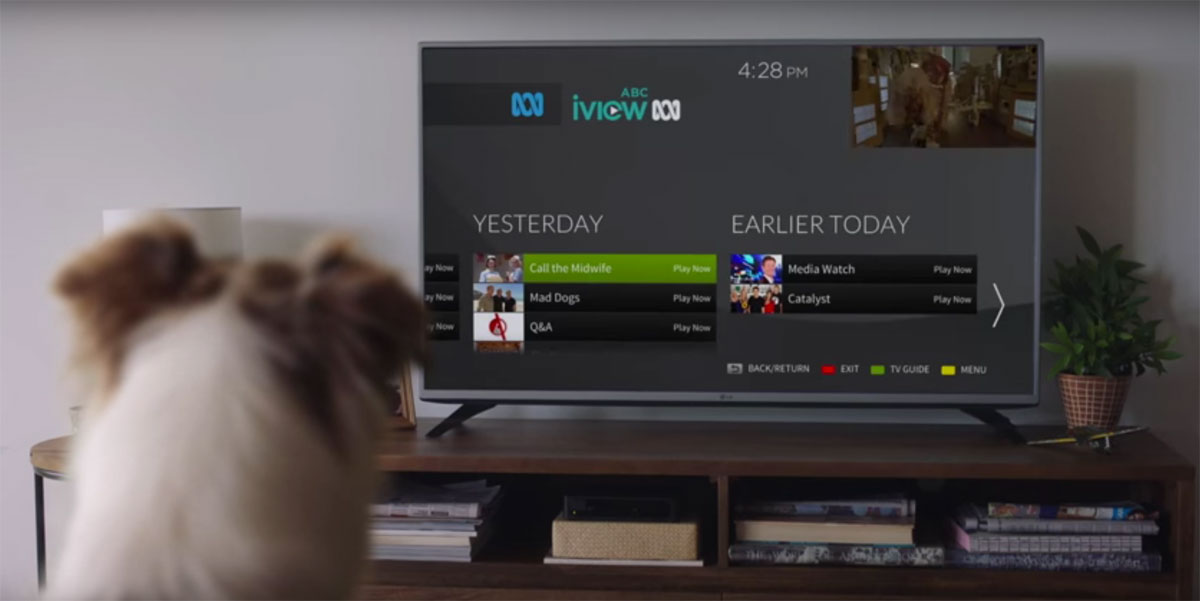 Freeview CEO Liz Ross explains why Freeview customers were not left out in the cold by 9HD and looks at the increasing prominence of streaming TV.

Freeview has put a dog in the focus for its new TV commercial, the latest in its Keeping up with the Freemans campaign.

In the commercial, the Freemans’ pet Dougie catches up on his favourite shows while his humans are out. Dougie binges on catch-up TV, revealing just how easy it is to use.

The latest ad is the third in a series that aims to bring to life the broadcast/internet hybrid service, FreeviewPlus.

FreeviewPlus, built off an international technology known as HbbTV, allows viewers the ability to watch broadcast television as they always have, but with the added benefit of being able to stream catch-up and on demand internet content provided by the broadcast channels.

2015 has seen a very clear shift in broadcast network strategy when launching their digital multichannels. With the launch of the lifestyle 9Life and the SBS Food Network channels, networks have shifted from a general entertainment focus to single genre. Freeview chief executive Liz Ross says that the change in network attitude won’t change the way that Freeview aims to promote the broadcast TV offer. “The core of what we do is we promote all of the choice and the variety of content across the free-to-air networks. It’s not surprising that several of the networks are taking a genre focus with these new channels and it’s really just offering consumers and viewers more choice. So it really goes along with the strategy of more channels: more choice.”

Alongside the debut of 9Life, Nine relaunched its high definition channel 9HD. Switching to MPEG4 broadcast technology for their HD channel, Nine was able to use the additional spectrum provided to broadcast its new lifestyle channel. The move to MPEG4, however, upset many viewers who found their television sets were not MPEG4 compatible, leaving them able to access only the existing standard definition Nine broadcast. Highlighting the importance of work conducted by Freeview for customers, Ross said, “The Freeview phase one technology that we brought out in 2009 mandated MPEG4.” Any customers who purchased a Freeview certified TV and are living in an area serviced by Nine will be able to receive their new HD channel.

Having recently attended the IBC industry conference, Ross said that she was heartened to find that consuming TV content on the primary household TV is still the dominant screen being viewed. “The European market is no different to Australia where people are choosing the best screen at the time,” Ross explained. “If you’re on the bus and the best screen is your phone, then you’ll use your phone. The other trend that’s certainly emerging is the longer the content, the bigger the screen. The data that we get in Australia is completely reflected in the data that’s coming out of other countries.”

Ross is looking forward towards the next iteration of the HbbTV software that powers the FreeviewPlus platform, HbbTV 2.0. Currently Australia employes HbbTV 1.5 technology.

“There will be TV manufacturers already thinking about 2.0, whether or not we mandate that now for FreeviewPlus, because they’re also producing for global markets as well,” Ross explained.

“We’re in constant discussion with our networks about all of the developments that are occurring locally and internationally. Particularly internationally. We’ve already done our evaluations of HbbTV 2.0 and we have the networks involved in a number of technical discussions. In 2016, you can expect that there will be more innovation announced and we’ll talk to you about that in due course,” Ross said.

One of the immediate benefits of HbbTV 2.0 is that it allows broadcasters to deliver their channels in Ultra HD, a format that includes 4K UHD (2160p) and 8K UHD (4320p). The upgrade to HbbTV 2.0 is backwards compatible, meaning that older sets will still be able to use HbbTV.

With so much of the forward momentum of Freeview requiring Internet connectivity, the requirement of paid-for Internet services is counter to the promise of a free alternative to costly subscription TV services. Ross rejected the criticism: “If you want to watch Freeview there’s no cost. It’s still broadcast. It’s still offering all of those broadcast channels for free. But there’s a growing trend in consumers TV consumption to stream.

“That’s why we call it FreeviewPlus. We don’t want to confuse the consumer. We have lots of information on our website. We don’t hide the fact that the Plus requires broadband capabilities. That said, most of the people that want to have that convenience of being able to stream content have good data plans. We don’t see it as an issue and we certainly haven’t had any questions or complaints through our website. We get a lot of visits to our website. Hundreds of thousands”.

Ross asserted that online streaming will continue to be a significant driver of content from broadcast networks into the future. “I think you’ll find that every network will be streaming and they are all at different stages of planning their streaming and planning their streaming on different devices. I don’t see any reason why streaming wouldn’t be allowed on the FreeviewPlus platform. I should note also that that started last summer when Seven did the Australian Open application on HbbTV, so the early adopters of FreeviewPlus have the opportunity to stream tennis matches on different courts that weren’t being broadcast.”

Whether consumers are seeking the sort of Internet content service offered by FreeviewPlus or whether they are seeking the on-demand content provided by services such as Netflix is yet to be fully determined. Would Freeview ever open up their Plus platform to welcome purely subscription services like Netflix? Ross politely advised that it “would be up to our networks to decide that”.

“I wouldn’t rule anything out.”