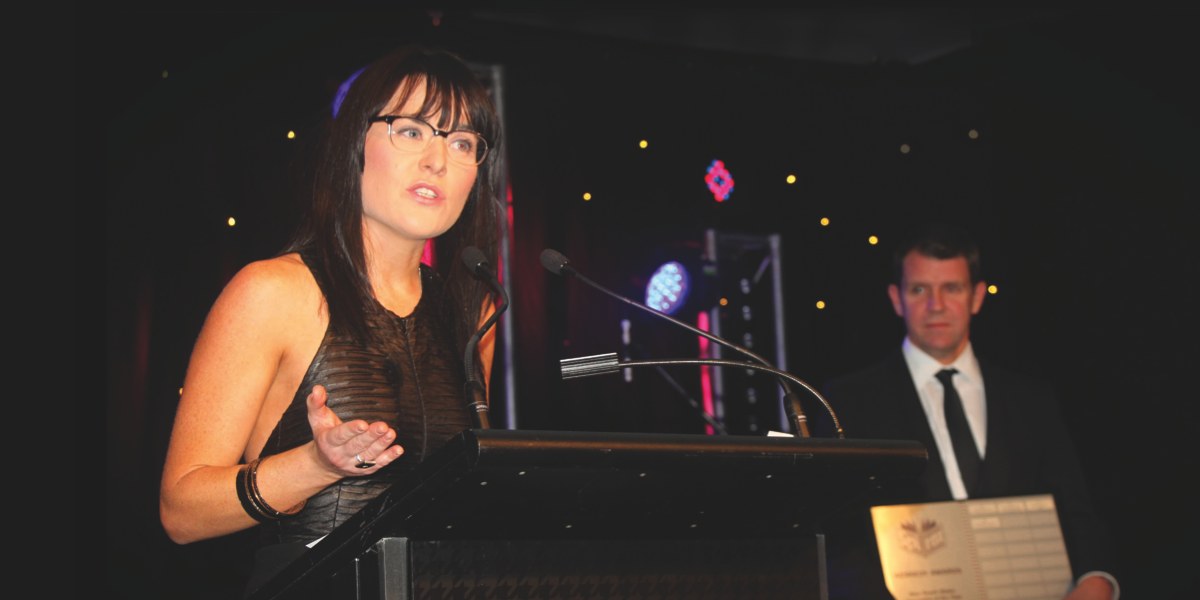 NSW Journalist of the Year Caro Meldrum-Hanna: “People need to be held to account”

Four Corners reporter Caro Meldrum-Hanna is no stranger to accolades. Since 2009, she has won several Quill awards, two Walkleys, a number of Kennedy awards and a Logie. But winning the 2015 NSW Journalist of the Year award was something else, she said. “I was stunned when I heard my name. I didn’t really believe it for a minute. My colleague poked me and said I’d better get up! It’s very different to other awards – it’s very powerful,” she explained.

Speaking to Mediaweek, Meldrum-Hanna said that the Kennedy Award was in recognition of the work of the entire Four Corners team. “I don’t see it as an individual award, but an award for the program. Good television can only be made with a great team, and I’m privileged to work here with what I consider to be the best in the business. It’s not just a reporter going out there and taking risks. It’s a producer who is working just as hard alongside you, a researcher behind you and a crew that are up at crazy hours with you. You can be a great television journalist, but if you don’t have a crew that’s enabling you to have crazy early starts and late finishes, and following through with your strange ideas for the vision, then you don’t get it on screen.”

On top of NSW Journalist of the year, Four Corners and its reporters won the Peter Frilingos Award for Outstanding Sport Reporting, Outstanding Television Current Affairs, Outstanding Consumer Affairs Reporting and Outstanding Investigative Reporting in recognition of investigations into greyhound racing and illegal labour practices. Explained Meldrum-Hanna: “It was the greyhound racing story Making a Killing [about live baiting in greyhound racing] and Slaving Away, an investigation into a fresh food chain and the exploitation of migrant labour. It looked at how the chain of production has been corrupted by unscrupulous labour hire contractors, who are gathering up migrant workers and grossly underpaying and abusing and mistreating them. It’s a shameful practice.”

As well as greyhound racing, Meldrum-Hanna investigated 2013’s biggest sporting scandal – doping at Essendon Football club. She won her second Walkley for the story, off the back of a harness racing investigation that netted her one of the prestigious awards in 2011. So what draws her to the darker side of sport? “Sport encapsulates and represents all of the human struggle and the human condition. There’s competition, there’s corruption, there’s win at any cost, there’s bending the rules. There’s severe determination and there’s perseverance. I just seem to be attracted to it. It’s a ripe area for investigation because of that absolute drive and competition. Particularly when money is involved with sports and you mix in that gambling purse, that’s when the opportunity and capability for wrongdoing is absolutely sure.”

A combination of tipoffs and research allows Four Corners to put these stories to air. “It’s a lot of out of the office. As an investigative journalist, you can’t get anywhere on the phone. You have to get out there and meet them. If they don’t want to meet you, you have to find a way to get them to meet you face-to-face and build trust. If you get a tip, you have to get people to talk to you and validate or disprove it. When I first started looking into a few stories, a very reliable and trustworthy source of mine said to me ‘Remember that the first language of sport is lying’. Most of everything you’re told initially will be a distortion of the truth. There’s a lot of pounding the pavement and getting in people’s faces,” she added.

Failing to achieve that means the story is killed, she continued. “A lot don’t make it to publish, and it’s often the ones that you just know – your antenna is up, but you don’t have enough to corroborate it. That’s a frustration shared by journalists everywhere – when you’re onto a story, but just can’t get it across the finish line. The bar is high in television, and you need to be able to prove what you’re saying on camera. You may have the story totally figured out, but if you can’t get those people on camera then you can’t get it out there.”

These stories sometimes find their way to the ABC news websites, she added, noting she was grateful for the increasing diversity in the way that journalists can now tell their stories. “That’s the wonderful thing about our changing media landscape – now there are ways to push stories out there even if you can’t get it across the finish line for television. But the flip side of that with our media landscape is that with the huge world of online news, you may have something great that you push out, and then it gets buried in the news of the day if it’s not getting enough clicks. It’s a ferocious environment to try to get your news read or listened to or watched, now there’s this proliferation of new media.”

>> Getting to know Caro Meldrum-Hanna

Despite her plethora of awards and an enviable position reporting for the national broadcaster’s flagship investigative program, Meldrum-Hanna never set out to work as an investigative journalist – or a journalist at all.

“I was at university studying law and communications, and I thought I was going to be a lawyer. When I was there, the then-head of UTS Journalism Wendy Bacon organised a four-week internship for me across the road at the ABC. It was working for free for a month in the investigative unit, and I seemed to be better naturally at journalism than at law. I loved it. It was an epiphany for me – it felt completely natural and right. I got a casual job in radio news, then pretty quickly moved over to television as a researcher. That was the absolute formative years for me. I was working with Deb Masters who has just produced The Killing Season. She’s one of the most remarkably talented producers in Australia. She taught me everything. I was doing research for reporters like Sarah Ferguson and Quentin McDermott at Four Corners, and watching and picking up on what’s required for television and research. I was very lucky to work under the best in the business.”

As to the importance of good investigative journalism in Australia, Meldrum-Hanna stressed the importance of news organisations continuing to fund it. “If we don’t have journalists in this country who are given time and the support and the resources to do what they do, which is seek out the truth, expose wrongdoing, give a voice to the voiceless, stop corruption, right wrongs, then we are all worse off for it. We would never have found out about live cattle exports, we would never have known about the financial planning scandal that Adele Ferguson exposed, we would never have learnt about so many things. It is essential for our knowledge, and people need to be held to account. You can’t do it, you can’t get to the truth, unless you have the time and the resources. It can be an expensive business, but it’s the most important business.

“In addition to needing investigative journalism, we need brilliant leaders like Sue Spencer who are willing to think outside of the box to get the program to air. There are always lots of barriers to getting the material out there, and it was through her leadership and her bravery and encouragement that we could. Making a program such as Four Corners, you have to live and immerse your world in the lifestyle of those that you are reporting on. You have to get up at 3am as the greyhound trainers do, you have to go to the track and follow their handlers. It’s painstaking and exhausting. We didn’t know who these people were so it’s a process of sitting at the race tracks and trying to pick out the faces in the crowd. It was exhausting. I think I’m still under-slept from that!”