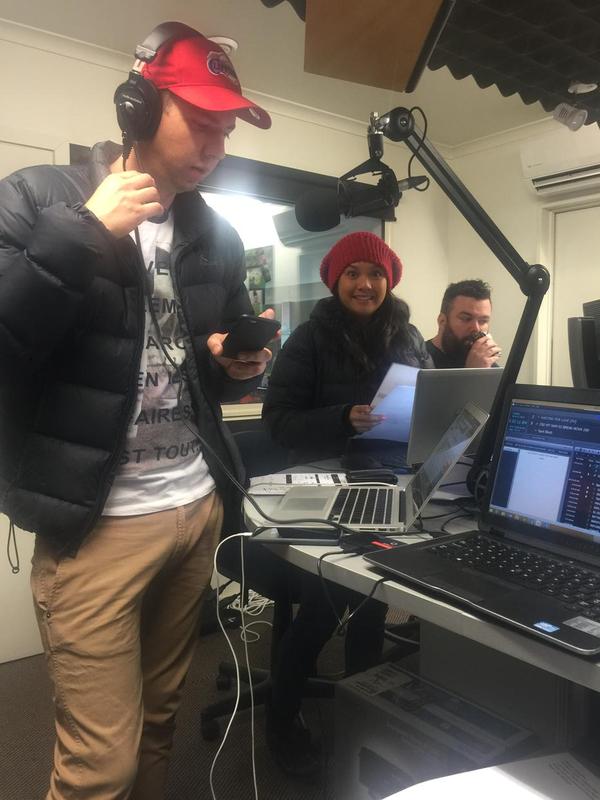 Day 2 of the Nova 100 breakfast show on the road in New Zealand and Meshel and Tommy and their camper van convoy have arrived in Timaru.

“You look like somebody who hasn’t had much sleep,” said Meshel Laurie to her co-host Tommy Little.

Little groaned, mentioned the coldest night ever in the sleepy South Island hamlet and said, “I’m not cut out for this. I wouldn’t be surprised if I don’t survive the week.”

The temperature dropped to -6c in Timaru last night. “The grass is crunchy,” said Laurie.

The content was flowing early with a live-to-air call with Russell Brand, who admitted he was coming to NZ too, visiting the “chlamydia capital of the world”, Hamilton.

Nova 100 breakfast was broadcasting from The Hits in Timaru. Studio space is so scarce there that the regular NZ morning host pre-recorded his show to allow Meshel and Tommy to use his studio.

Tommy had to shower in the camping site communal bathroom block today and swears he nearly got methane poisoning from the odour wafting out of his camper van.

Other Timaru highlights included Tommy getting nude on a statue and a game of Bike Polo.

After signing off today Tommy headed back into what he calls “the tin can full of farts”.