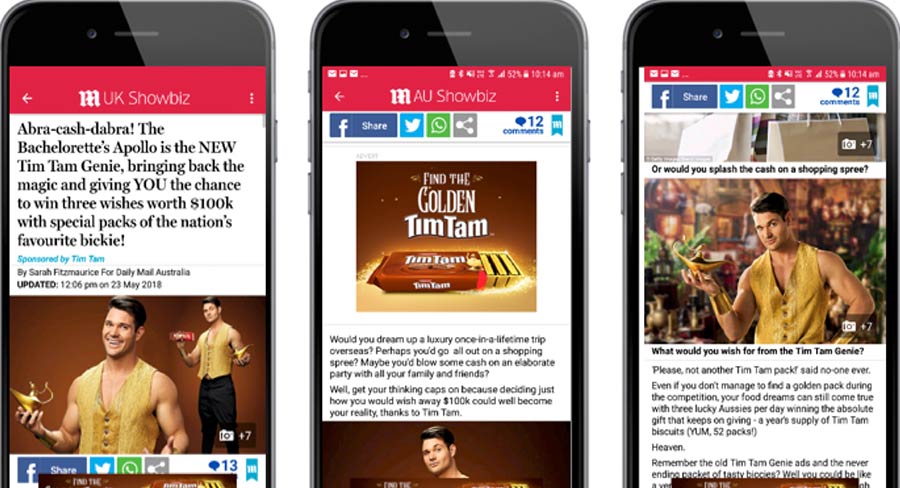 Daily Mail Australia has detailed a partnership with Arnott’s Tim Tam and Wavemaker to celebrate the return of the Tim Tam Genie and to promote the Golden Tim Tam competition, which rewards three customers each with three wishes worth $100k.

With a readership of 3.1m Australians, Daily Mail Australia was selected as Arnott’s digital media partner to ensure that the Tim Tam activation was an integral part of the daily news agenda throughout the three-month campaign period. The partnership was launched on May 2 with a full site takeover as well as Arnott’s Tim Tam owning all social extensions and supporting editorial display. On the same day, Daily Mail Australia also published the first sponsored content article, announcing the appointment of Apollo Jackson – the popular contestant in The Bachelorette and Bachelor in Paradise – as the new Tim Tam Genie.

This was the first time that a brand has set up a registered account on Daily Mail Australia and allows the brand and the character of the Tim Tam Genie to directly respond to readers’ comments.

Daily Mail Australia also partnered with nine Instagram content creators – including of-the-moment celebrities, food bloggers and lifestyle influencers – whose selection was based on their reach, audience and creative flair.