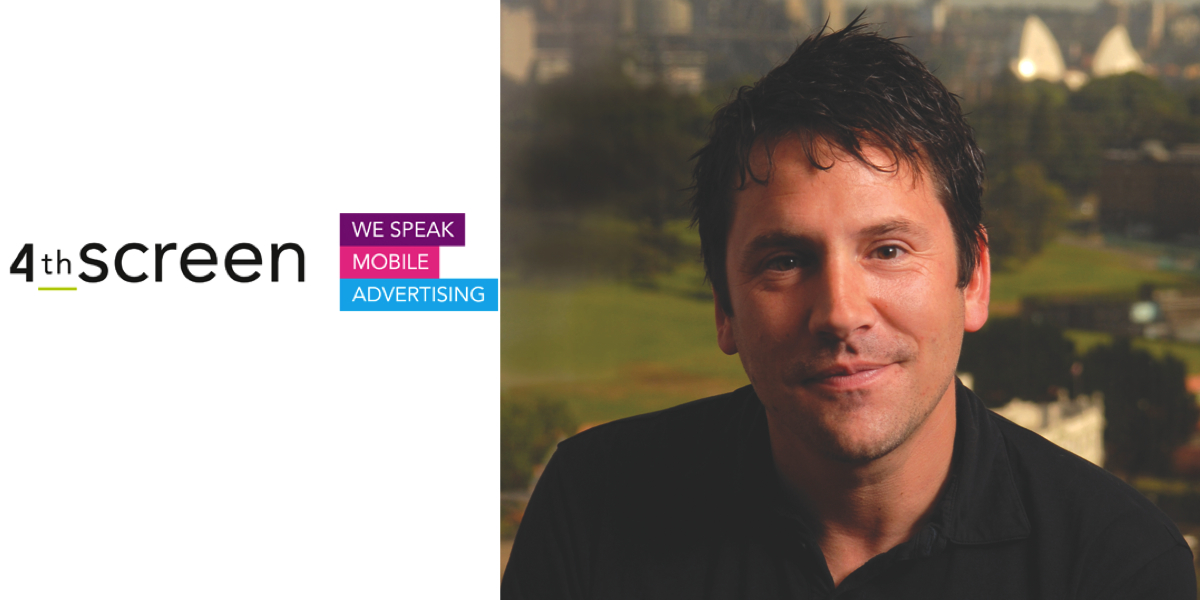 “We’re a specialist mobile advertising agency, and what we’re trying to do is work with big brand advertisers and deliver converged mobile solutions. We want to meet their ad spend with the right audience in the right place at the right time with the right engaging and interactive format,” he said when we asked what exactly 4th Screen Advertising does.

This week, the company launched its mobile marketing innovation, Premium Audience Targeting (PAT). PAT creates a complete view of the likelihood of a user engaging with a particular ad in a premium, relevant mobile environment. “It’s a product that combines our unique premium inventory [including publishers like Bauer, BBC, The Guardian and Perform Group] with first-party, zero-party and third-party data. We develop a profile of an individual user – their habits, where they are, what they like – which helps us to serve contextually relevant ads. What we do is take this data, put it on our audience management platform and create audience segments that we can then deliver at scale so people can target audience and behaviour in the backdrop of a secure and quality environment,” said Birch.

While he noted that the landscape is extremely competitive, he said that PAT stands out. “We are perhaps the only company that is trying to deliver mobile solutions for brands at scale. PAT is a combination of contextually relevant premium and quality environments, brought together with the latest insights and data that are arguably unique to mobile, along with highly targeted data sets and audiences. It’s designed to be a solution for brands, and we underpin that with creativity and market-leading rich media formats.

“If you’re Nike, you want to know where the ads are running and make sure that they’re in contextually relevant and transparent environments. But you also want to target the real sports fans – if you’re selling running shoes, we can put them in running apps or sports apps, but how do we target people with a higher propensity to buy these products? That’s what PAT is designed to do.

“Everyone is selling audiences now. If you speak to any publisher in town, they’re going in saying ‘We are now able to sell audience’. If you ask the agency guys, they’ll say that it’s very hard to sift through whose product is genuine and robust from those whose products have a few questions around them. Consistent stats say that the majority of internet users are on a mobile device, and ad spend doesn’t match that. I’m not necessarily saying it should – otherwise, there’d be ads on toilet paper. But there is without question a gap. A recent IAB study said that 80% of people on buy side and agency side are looking to up their mobile spend. If I look at the briefs that we got last year, it’s doubled in size for this year – it was previously $15,000 and now it’s more like $30,000. We are increasingly seeing bigger briefs though, for $100,000+.”

He denied that was a disproportionately big piece of the pie. “If you look at the size of the briefs that print and outdoor are still getting, there’s clearly a mismatch there.”

These large briefs are coming from across the consumer spectrum, Birch said. “Every agency in town is embracing mobile – it’s not just a small section like automotive or entertainment, it’s everybody. It’s chocolate bars to finance, movie houses to banking. We have won entire campaign budgets before.”

Alongside the rise of digital and mobile advertising, a major concern has been brand safety and the necessity of transparency. But Birch said that the importance of this has been overstated, arguing that brands want more control. “Do big brand advertisers want to be on Dan and Dave’s sports site manufactured out of someone’s back shed in Wollongong, or do they want to be placed on BBC Sports with a tried and tested publisher with quality editorial, interesting insights and unique content? For us, that’s what premium is – quality, instantly recognisable publishers. Brands are increasingly finding it hard to control where their ad is being placed as they increasingly target audiences. What we find is people in market selling audience alone are doing so because they don’t have the premium environments to sell – we have both. I used to work in television, and we didn’t sell the entire network, we sold specific shows. I’m not sure that it’s acceptable in digital to just sell all the sites you have access to, rather than the ones the advertiser actually wants!”

>> Agency vs direct: Who does 4th Screen Advertising work with?

When we chatted to Birch, he said that although the company wasn’t opposed to working with direct clients, they don’t typically seek them out. “It hasn’t happened here, but in the UK if we bypassed an agency and went directly to the client you never knew what the reaction would be. My big preference is to go through an agency, because if you do a good job, you’ll hopefully get more campaigns. Over the last 12-24 months, working with agencies has gotten significantly easier. You’ve got people like IPG Mediabrands setting up Mnet, their specialist mobile arm – we can deal with the mobile specialists rather than the other 300 people in the agency. Omnicom has Airwave, and Ikon has just partnered with Geronimo. That’s helping to drive an increased mobile spend, but also ensuring that the creative bar and the measurement bar are being raised. You have a dedicated set of agency-side people who are really focused on it, really able to implement it and drive it.”

Before joining Mobile Embrace, Birch worked in television for both ITV in the UK and Channel Ten