In an Australian first, leading market research and insights company, Colmar Brunton has released a landmark study to identify the financial impact of expenditure on media including TV, radio and online used on their own and in different combinations.

The study was undertaken to provide an evidenced-based methodology to help companies decide on the best media buying options, including digital, after it was found there was a fundamental lack of evidence about the financial impact of media spend amongst many Australian companies.

Colmar Brunton’s CEO Joan Young (right) said the study was inspired by Colmar Brunton’s clients who were increasingly looking for a way to measure the impact of digital media relative to other media options on media spend.

“Our clients repeatedly told us they needed an evidence base to help them make decisions about which media, or combinations of media, they should use,” said Young. “Clients are particularly keen to embrace digital media but many still remain unsure about how to measure its impact relative to other media options.  The study has enabled us to provide clients with the methodologies on how to measure impact.

“Our goal is to use this information to improve the financial impact of expenditure on communications,” said Young. “Now that we have found a simple way to measure the return on media spend, brands have a benchmark and can see what is possible and how to move towards that.”

Based on similar work conducted in the USA, the methodology of the Australian-first study was developed by Colmar Brunton and sourced information from 21 brands across FMCG, services and government.

Colmar Brunton identified the overall financial impact and was also able to measure the impact of using each media channel and combinations of each channel* to get a sense of channel ROI.

Maree Taylor (left), Managing Director Colmar Brunton explained that having  the overall benchmark of ROI across sectors and within each sector was needed to give clients the ability to compare their ROI results with others in their sector and across sectors.

“The findings highlight that if a company can get the right level of spend on the right channel (s) together with the right creative strategy then there is a huge potential for better ROI.  However, it also identified the significant potential risk of spending more on a communications campaign than the sales (or enquiries) it is able to generate if you get the combination wrong,” said Taylor.

“Adding a third channel doesn’t necessarily improve the outcome unless that channel is radio.  We found that by adding radio to a media spend on TV and online resulted in an average increase of 23%”. 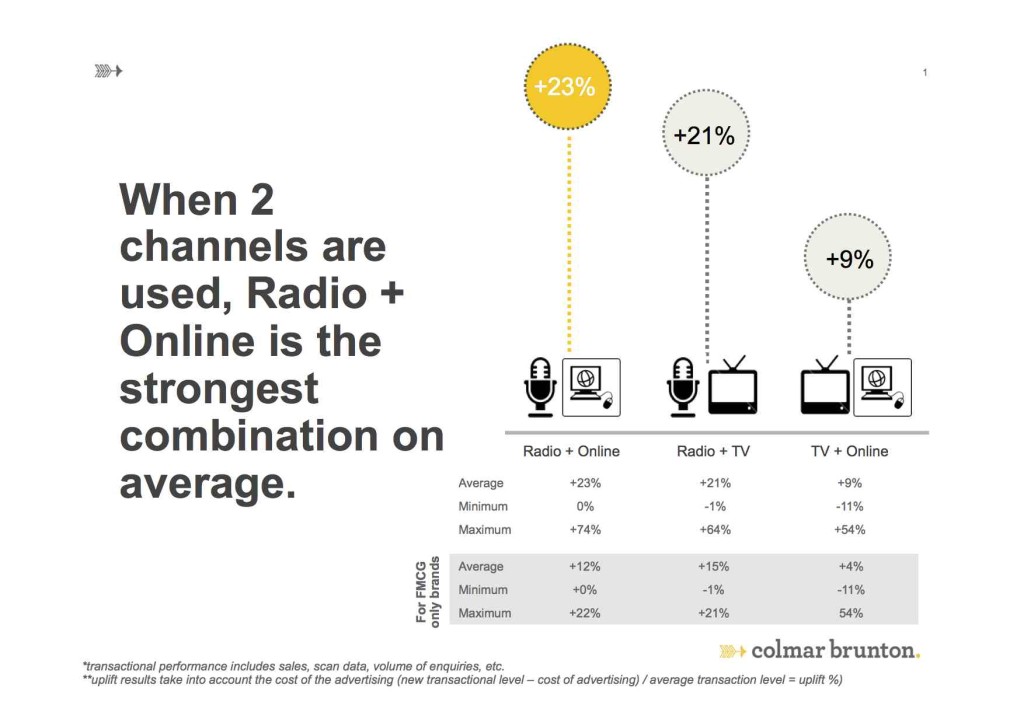 Colmar Brunton’s Media ROI study aims to provide evidence about the financial impact of expenditure on media to help organisations make more informed decisions about which media channels and combinations of channels to consider.  Colmar Brunton’s approach to determining financial impact included both the dollar spend on a campaign and the impact on behaviour change resulting in increased sales or enquiries.

Colmar Brunton received the full media schedule for 21 brands over 18 months (provided at a weekly level, including channels used, spend per channel) and also their sales data across that same timeframe (scan data).  The three brands that didn’t have sales data provided enquiry volumes.