The publisher CEO Panel returns to this year’s annual Future Forum conference for news media to be held in Sydney on Friday, 2 September. 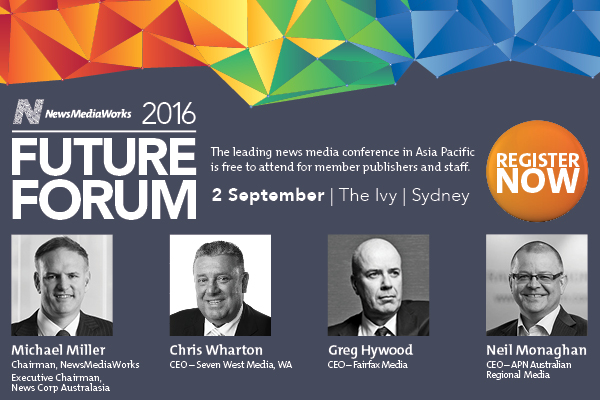 Other speakers at the Future Forum include:

The Future Forum is the annual conference hosted by NewsMediaWorks that brings together news media executives and delegates from around the world for a program of high-profile speakers.

“The CEO Panel is a highlight of the Future Forum, and along with our world-class international and local speakers, it’s an industry event not to be missed. Our speakers will bring their considerable knowledge and share their insights with our audience of publishers from the Asia Pacific region,” NewsMediaWorks CEO Mark Hollands said.

“The Forum will also culminate in the hotly contested Newspaper of the Year Awards, with finalists to be announced this week.”

The Future Forum, sponsored by Norske Skog, will be held on Friday, 2 September at The Ivy in Sydney.

Registrations to attend the Future Forum are available here.