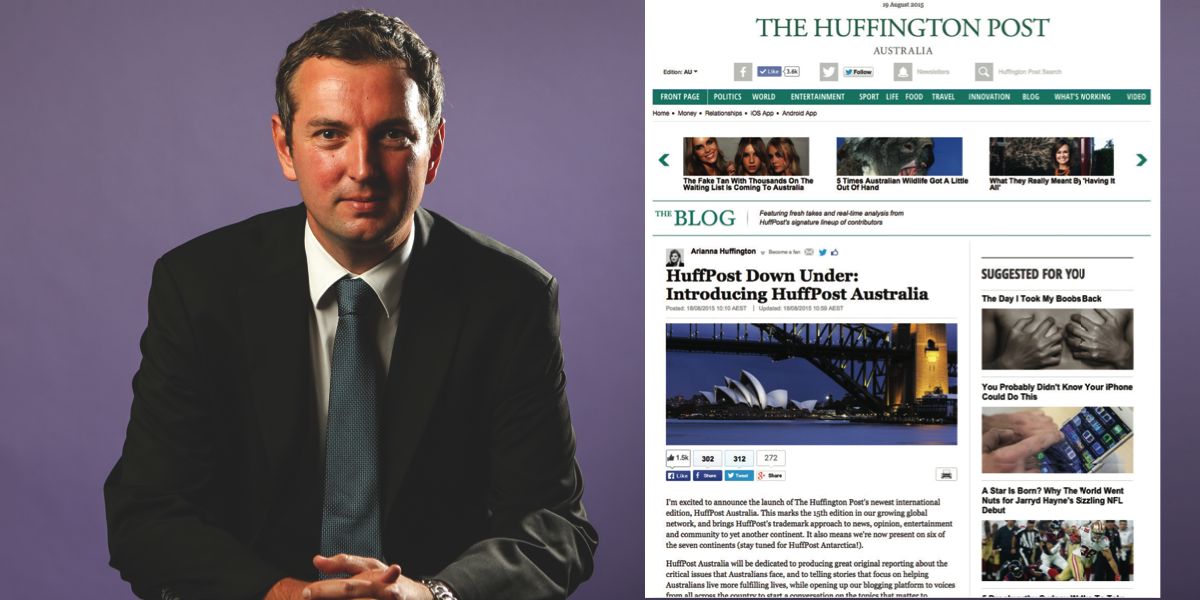 HuffPost Australia CEO Chris Janz: “The aim is to be profitable within three years”

Chris Janz is possibly the best-credentialled digital media executive in Australia when it comes to launching or relaunching online publishing ventures.

After time at News.com.au, Janz launched Allure Media in Australia about eight years ago with Fairfax Media eventually acquiring the business. Janz then took some time out to consider his future but he had a fair idea of what he wanted to do next after a visit to New York.

“I met some of the team from The Huffington Post in Australia and ended up going over and seeing the operation and it was the kind of operation that once you walk into the newsroom there is no turning back. I left that day with a very clear view that I wanted to have the job.

“How often do you get the opportunity to launch something as a start up in this country that has 214m unique visitors globally? It is well entrenched as the #1 international news site, but here it is very much a startup.”

Janz was in discussions with The Huffington Post before they chose their Australian partner, with News Corp Australia one of the unsuccessful bidders. He didn’t sign on though until site founder Arianna Huffington chose Fairfax Media for the Australian JV.

As to why Fairfax Media was chosen as the partner, Janz noted: “From the upper levels within Fairfax it is very clear they are supporting this as a new masthead launch. That kind of support is quite unique to Fairfax. Fairfax understands the future of journalism is not just the brands that people already know and love, but new brands entering the market. They understand the diversity of the digital mix.”

Australia is the 15th market to get its own edition of The Huffington Post. An Arabic edition launched two weeks ago and the next two on the rollout road map are China and then Mexico.

“There is a game plan and we have the benefit of being country #15 and using the learnings from the past four years since The Huff Post has been rolling out in international markets,” said Janz. “The thing that attracts me to The Huffington Post is that they truly understand that each market is different and there are nuances that only people in the market understand.

“That is quite unique with international publishers. A lot of the time there is a top down mentality that governs the treatment of a story or how they operate commercially.”

When it comes to what has worked historically for the news brand, Janz said: “So much of Huff Post’s success is constant reinvention. It started off as a politics blog 10 years ago and it grew to become the most popular news website in the US and then embarked on international expansion. In recent times the focus has been on lifestyle content – giving people tools to lead a better life.

As the #1 news brand in Australia, The Huffington Post will be competing with News.com.au, a place both Janz and his editor Tory Maguire have worked.

Janz: “We don’t enter a market to be #10. We want to be a top player in the market. We have a different take on things and they are very good at what they do. I don’t want our team to be looking over their shoulder at what News.com.au is doing and attempting replicate or to beat News.com.au at the race they are running.”

As for a timeline to get to the top, Janz said they want to be top five news website here within three years. “We don’t expect it to happen overnight. The clear ambition now is to grow the audience over time. We don’t want to have a big jump, but then be a flash in the pan.”

When asked about the need to be different to what Fairfax is doing online, Janz noted they wanted a point of difference to what everyone else is doing.

[blockquote style=”3″]CV: Chris Janz
After several years in journalism, Janz joined News Limited and was editor of News.com.au. After a year as online manager of Endemol Southern Star, Janz launched Allure Media which licensed US web brands for Australia including tech sites Gizmodo and Lifehacker. Janz was never a big fan of talking about the business during the Allure Media early days. We asked him about being off the radar.

“It was off the radar by design because we didn’t want the big guys to know what we were doing. We successfully built the biggest websites in each of their verticals and Allure now has 8m Australian uniques a month – it’s a big little publisher. “

The exciting things for me there were bringing great US brands to Australia. That has been very useful in bringing HuffPost to Australia.

I have done it six or seven times before. I have learnt lessons about what works and what translates beautifully and what you need to take a different approach on.

“There is nothing in the CV I am not proud of – I loved the lot of it.”[/blockquote]

>> Arianna Huffington on her Aussie partner

“Fairfax’s independent values, proud journalistic heritage and digital expertise make them the perfect partner as we pursue our shared mission of telling Australia’s most important stories and providing a platform for Australians to tell their stories,” she said earlier this year.

>> The pitch for customers

“We are the world’s #1 news website with 214m unique visitors globally in 15 markets in nine languages. It is very much an Australian website for this market.

“We are centred around four pillars – informing, inspiring, entertaining and empowering. It is those pillars that make us a little bit different.  Every news website has a national section, a politics section and a world section, but they don’t necessarily have editorial themes like inspiring and empowering that filter right across the website. Those themes are part of our DNA.”

The Australian Huffington Post newsroom won’t be a content factory. “People expect quality rather than quantity,” said Janz. “We won’t be changing our splash every 15 minutes for the sake of it.

“We will be staffed up 24 hours a day, seven days a week. We have the best team – we had 1,800 applications for the initial 18 roles. I conducted about 200 speed-dating interviews and we have pulled together the most amazing team. The energy we have in the newsroom is sensational.”

Video is a key part of The Huffington Post offering with Janz noting they had a global ambition for 50% of the content being delivered on video within the next two years. “We have access to The Huffington Post video network and there are three key areas they get their content from – their newsroom, the second is the HuffPost productions including HuffPost Live which is 40 hours a week of interviews which are cut into shorter clips and we have just announced HuffPost 24 which is a linear TV channel distributed by all sorts of methods. The third is partnerships and we are developing our own multichannel network where we will have user-generated content.”

The Huffington Post won’t be using Fairfax copy. “We won’t be a substitute for The Age or The Sydney Morning Herald – we are targeting a different segment of the market.”

“There are two major elements to The Huffington Post. The first is the journalism with professional features and content. We don’t want to be seen as left or right, but a balanced place to go. The other element is the blog platform offering people the chance to write what they want when they want.

“So far there have been more than 100,000 contributing from President Obama to an everyday mum. We don’t edit other than for legal reasons.”

Janz noted that none of the bloggers are paid.

“We operate on a display ad model and we believe very much in the future of display. We don’t have a paywall in place in any of our markets. We have some great agency partners around the world who understand the connection between what we are doing and what their clients are looking for.

“The aim is to be profitable within three years.”

Janz said the Australian business had already been able to increase is staffing levels after initial ad sales success. Fairfax Media is selling advertising on The Huffington Post as part of their contribution as a partner. The Huffington Post on the other hand contributes content.

“About half of our audience is aged 18-34 and skews slightly female.”

Although it’s a younger demo, don’t expect to see any nudity or rough language. “We want to be a site that people are proud to share. We are the most shared website on Facebook. People will never be embarrassed reading The Huffington Post.”