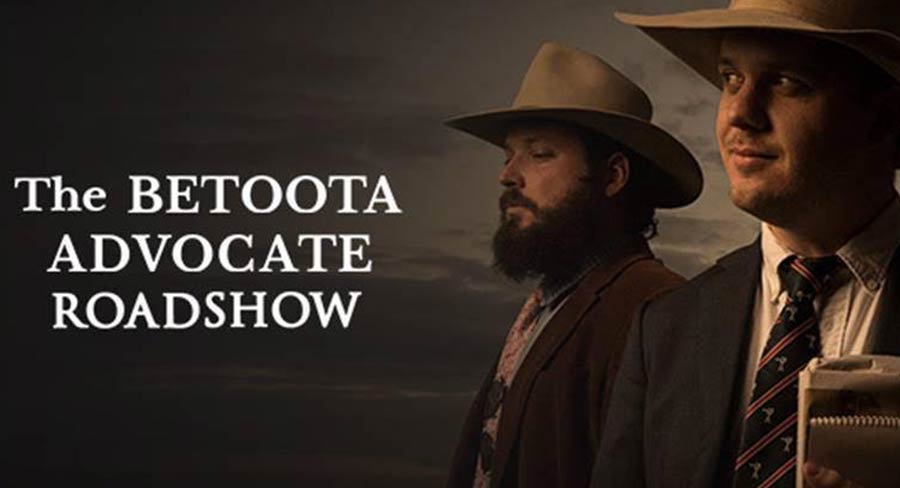 This is not bad for a newspaper meant to based out of a town with a population of zero.

Since launching its website in 2014 The Betoota Advocate has added another dimension to the Australian media landscape through the use of satire.

Similar to the American website The Onion, The Betoota Advocate labels itself “Australia’s oldest newspaper”, which has more recently made the transition to digital.

In just a few years The Betoota Advocate now grown to over 500,000 Facebook likes and performs well in the 18- to 30-year-old demographic. This success has seen the brand bleed out into other areas, which include alcohol (Betoota Bitter) and a clothing line (Betoota Outfitters).

This is not bad for a newspaper meant to based out of a town with a population of zero.

Really based in Sydney, Errol Parker (editor-at-large) and Clancy Overell (editor) are the pen names of the founders, who recently spoke with Mediaweek about some of the fictionalised history behind Australia’s oldest newspaper.

As the story goes, Overell was “born into the role of editor like any good media professional – it was promised to me, it was written,” he told Mediaweek.

“I am a 4th generation editor of The Betoota Advocate from a relatively well-respected family out here in the shadow country. I started as a cadet, then bounced around for a few years. I had tried to make a career in rugby league football but a knee injury put an end to that so I took a 10-year sabbatical.

“I then returned as a sports reporter to The Betoota Advocate and then sports editor. I then spent five years as the Charleville correspondent, then headed back and took the editor’s role from my father, who was in the role for a couple of decades.” Overell met Parker at a race meet in Central Queensland in 2014. Parker had just returned from working in the industry in England and Overell offered him a job.

According to Parker the success of the site is due to an intern. “Clancy took the newspaper online in 1996 and it was there for people who had since moved out of the circulation area.

“It wasn’t until 2014 that our intern at the time had a bit of a brainwave and said, what about we put you on social media, and it went gangbusters from there.”

The Betoota Advocate has emerged as a part of the Australian media during an interesting time.

With Australian politics in a state of flux, media consolidation, a difficult economy and a change in the consumption habits of the public, The Betoota Advocate seems to have found a niche through its flat hierarchy approach to parodying Australian culture.

According to Overell: “When your looking down the barrel of a leadership challenge or a federal election, every media organisation is put under the microscope of where their allegiances lie.

“We kind of bounce along the spectrum and report where we find news worthy events and we skewer all ends.

Parker agrees and also brings up the importance of telling a wide array of stories that cover a broad cross-section of the public. “You need to treat everyone with the same respect. Everyone’s story is worth telling and it is up to the person who reads it.

Overell agrees: “It has certainly had an effect on our popularity since going online because, while it might seem mundane or niche, you need to write for everyone and while we are writing for the town it translates right across the country.

“The little stories you are writing that might seem insignificant or unreliable are there for someone else and there are a lot of someone elses in Australia.”

Following its success, The Betoota Advocate has announced that it will tour Australia in November/December 2018 through TEG Dainty and Nice Events.

The national tour is described as a no-holds-barred live show in true Betoota-style, filled with its trademark approach to news. The tour starts in Townsville on Saturday November 3 and will feature Darwin, Toowoomba, Brisbane, Gold Coast, Wollongong, Newcastle, Perth, Melbourne, Hobart, Adelaide and Canberra before finishing in Sydney at the Sydney Opera House on Saturday December 1.

According to Parker, now seemed like a good time to do the tour: “In this news climate there have been a lot of changes in the industry and we thought it was time we really told the story of our newspaper and how we managed the journey from being an old media organisation to being one that is growing and thriving in this media age.”

Asked what areas of Australia excited them the most, Overell answered: “We are looking forward to starting in the deep north, in Townsville. We are excited about every show but Melbourne and Sydney are less exciting because they are one and the same, those two. But we have a lot of readers in the area so it will be good to touch base with those cities.

“As for seeing the country, it doesn’t get much better than the coastal delights of Townsville, Newcastle, and Wollongong. Even the Gold Coast has its own thing going.”

While there are a lot of laughs expected, Parker also points out that there is an important message as well: “The most important thing to take away is that there is hope for journalism in this country. It isn’t all doom and gloom. It’s about just battling it out and hoping for the best.”

Each performance will be localised with its own special spin as each city will have a show tailored for its audience.

With the merger of Nine and Fairfax still fresh and the possibility of more media consolidation on the horizon, Overell said they don’t expect much to change in regards to The Betoota Advocate’s independence for now. “There would be more dignity in being bought out than merging, I’d have to say.

“If that well dries up, which it doesn’t look like doing, we might have to make some of those scary decisions before we retire and pull our parachute and retire to the beach.”

Tickets are available for purchase here.