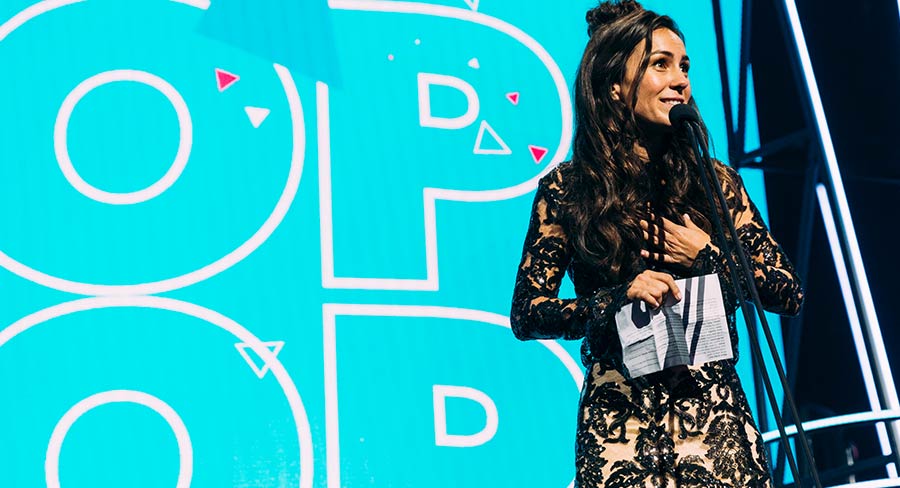 Winners at the sold-out 2018 ARIA Awards, held at The Star Event Centre, Sydney, and broadcast nationally on the Nine Network, were announced on Wednesday night.

Gold Coast local Amy Shark took home a total of four ARIA Awards. Shark won the Apple Music Album Of The Year Award for her ARIA #1 album, Love Monster, as well as ARIA Awards for Best Female Artist and Best Pop Release. This adds to her win earlier this year at the 2018 ARIA Awards Nominations Event when her Double Platinum hit single I Said Hi picked up the Producer Of The Year Award.

Guests at The Star Event Centre and the fans watching on the Nine Network were treated to an epic performance from Shark, cementing her as one of Australia’s emerging stars.

It was also a very special night for the late Gurrumul, who was posthumously awarded ARIA Awards for Best Male Artist and Best Independent Release, also adding to his win earlier this year at the 2018 Nominations Event when he picked up Best World Music Album, and Best Cover Art for Caiti Baker’s work for Djarimirri (Child of the Rainbow), taking his overall 2018 ARIA Awards tally to four for his #1 album, which made Australian chart history by becoming the first indigenous language album to debut at #1.

Jessica Mauboy and Briggs from A.B. Original performed a very special musical tribute to honour Gurrumul, who sadly passed away on July 25, 2017, at the age of only 46. Gurrumul’s daughter Jasmine Yunupingu joined the Australian musicians to perform a rendition of Gurrumul’s Wulminda, celebrating his life and legacy.

The tone of the 32nd ARIA Awards was set when 5 Seconds Of Summer, ARIA Award winners for Apple Music Song Of The Year and Best Group, opened the show with a performance of their smash single Youngblood. The performance also showed why Australian music fans voted the band Best Australian Live Act.

Courtney Barnett charmed audiences with a performance of her song Charity, taken from her #2 ARIA Album Tell Me How You Really Feel, which was awarded Best Rock Album, as well as Engineer Of The Year for Burke Reid’s work on the album.

Much loved Sydney singer-songwriter Dean Lewis delivered a powerful rendition of his ARIA #1 single and 4x Platinum single Be Alright, with the public voting for the video to win the ARIA award for Best Video.

Camila Cabello fans voted her Best International Artist following the release of her debut album Camila, which peaked at #3 on the ARIA Album Charts and reached Gold status in Australia.

ARIA Award nominees Sheppard won the ARIA Music Teacher Of The Year Award, sponsored by Telstra and supported by The Song Room, and Scott Maxwell from Grant High School in Mount Gambier, South Australia was the proud recipient.

Ahead of her official induction into the ARIA Hall Of Fame, Kasey Chambers was the recipient of the Best Country Album ARIA Award with The Fireside Disciples. Chambers then went on to perform her classic hit single Not Pretty Enough. Joined on stage by Missy Higgins, Kate Miller–Heidke, Amy Sheppard and Paul Kelly, her performance also incorporated the track Ain’t No Little Girl, taken from her 2017 #1 ARIA Album Dragonfly.

Chambers has made ARIA history as the youngest female to be inducted into the Hall Of Fame.

Fans were also treated to performances from international superstars Rita Ora and George Ezra. Following the announcement of her Australian tour in March, Rita Ora performed Let Me Love You.

British singer-songwriter George Ezra impressed fans with his 3x Platinum #1 hit Shotgun, which continues its reign in the Top 5 of the ARIA Singles Chart.

The 2018 ARIA Awards host Keith Urban closed the ceremony with an exhilarating mash-up performance of his critically acclaimed track Parallel Line and was joined onstage by multiple ARIA Award winner Amy Shark for a version of The Fighter.

Denis Handlin, ARIA chairman and chairman and CEO of Sony Music Entertainment Australia and New Zealand and president, Asia, said last night: “On behalf of the ARIA board, I would like to congratulate all the winning artists and nominees at the 2018 ARIA Awards with Apple Music. It has also been an honour to welcome Kasey Chambers into the ARIA Hall Of Fame. The 2018 ARIA Awards have been a spectacular showcase of the vibrant array of homegrown talent that makes Australian music some of the best in the world. We would like to thank all of the 2018 ARIA Awards partners – Apple Music, Destination NSW, The Nine Network, The Star, Swarovski, Pepsi Max, Telstra and PPCA – for their valued support in making the ARIA Awards such a wonderful event.”

Dan Rosen, ARIA chief executive, added: “2018 has been an incredible year for Australian music and that was certainly evident by the phenomenal talent that graced the ARIA stage. The collection of tonight’s winners, nominees and performers highlight the world-class homegrown talent that we have here in Australia. ARIA congratulates all of tonight’s winners, in particular Amy Shark, Gurrumul and 5 Seconds Of Summer,a who all won multiple ARIA Awards.”