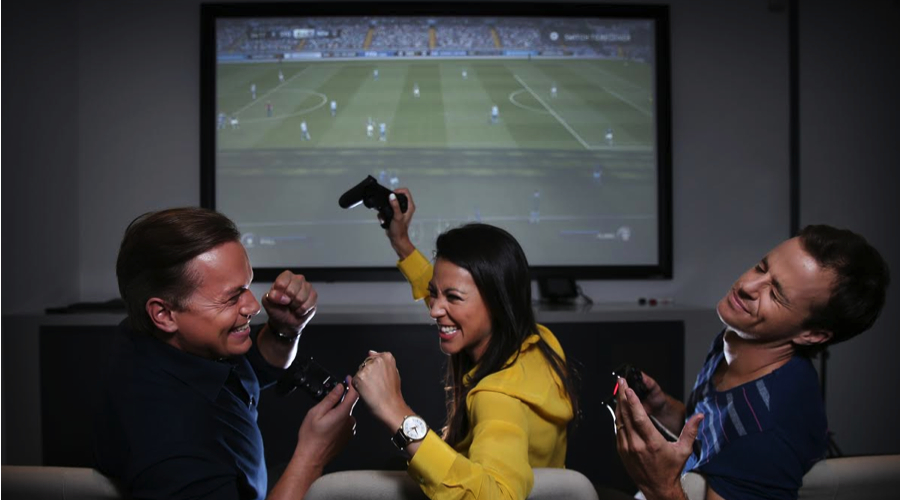 Fox Sports has teamed up with gaming giants EA Sports and PlayStation 4 to lay down the challenge to all Hyundai A-League fans and football gamers across the country in the ultimate EA Sports Ultimate Team showdown!
The inaugural Fox Fans League is a national challenge made possible with the support of Football Federation Australia and Westfield Shopping Centres and will bring together the nation’s best gamers to crown a champion on one of the world’s most popular video games, powered by the world’s most popular next generation home console, PlayStation 4.
Representing their favourite Hyundai A-League club, gamers will face an intense qualifying series staged in Westfield Centres around Australia from April 2.
At the completion of the qualifying series, sixteen of Australia’s best EA Sports Ultimate Team masters will then progress to the national final on April 29, to be broadcast nationally live on Fox Sports with match commentary from the Fox Sports football team.
Fox Sports CEO, Patrick Delany, said: “The EA Sports Football franchise is one of the biggest and most successful in the gaming world and the game of football, as we know, is exploding in popularity here in Australia.
“Teamed with PS4, Australia’s most popular next generation home console, the Fox Fans League brings these two worlds together. For the first time on Australian television we’ll see a live national broadcast of a video game contest, with a full commentary team to call the action as the two best FIFA gamers in the country square off in the final at Melbourne’s Federation Square.
“We are excited not only about the opportunity to deliver another Australian television first but, thanks to the support of our incredible partners, to engage the grassroots football community to compete in a nationwide competition representing their favourite Hyundai A-League club,” he said.
FFA CEO David Gallop has commended Fox Sports for the exciting innovation that brings the real and virtual worlds of Australian football together like never before.
“Digital and social channels are the drivers of fan engagement for the Hyundai A-League and the Fox Fans League provides a unique connection,” said Gallop. “It’s great to see this activation with A-League fans picking their favourite Hyundai A-League stars in a full-on gamer showdown live on TV.”
“We are often quoted as saying PlayStation 4 is for the players both on and off the field and this partnership is testament to our vision,” said Michael Ephraim, managing director, Sony Computer Entertainment Australia.
“As a proud partner of Football Federation Australia and the inaugural naming rights sponsor of the PlayStation 4 National Premier Leagues, we see Fox Fans League as a great initiative to highlight the passion and growth of grass roots football in Australia,” said Ephraim.
“The popularity of football has grown immensely in Australia in recent years,” said Simon Smith-Wright, Marketing Director, Asia Pacific, Electronic Arts (EA).
“Coupled with that, we’re seeing a huge rise in the interest and participation of eSports. The opportunity to combine the two is very exciting and so we are really thrilled to be bringing the Fox Fans League to football fans around the country,” said Smith-Wright.
Scentre group marketing director John Batistich said: “As proud partners of the FFA, we’re looking forward to hosting football fans and gamers in Westfield Shopping Centres around the country for the qualifying round of the Fox Fans League.”
Entry details for fans are available at the official Fox Fans League competition page at www.foxsports.com.au/foxfansleague. Join the conversation at #Foxfansleague
Source: Fox Sports
Photo: Fox Sports’ Bozza, Tara Rushton and Adam Peacock