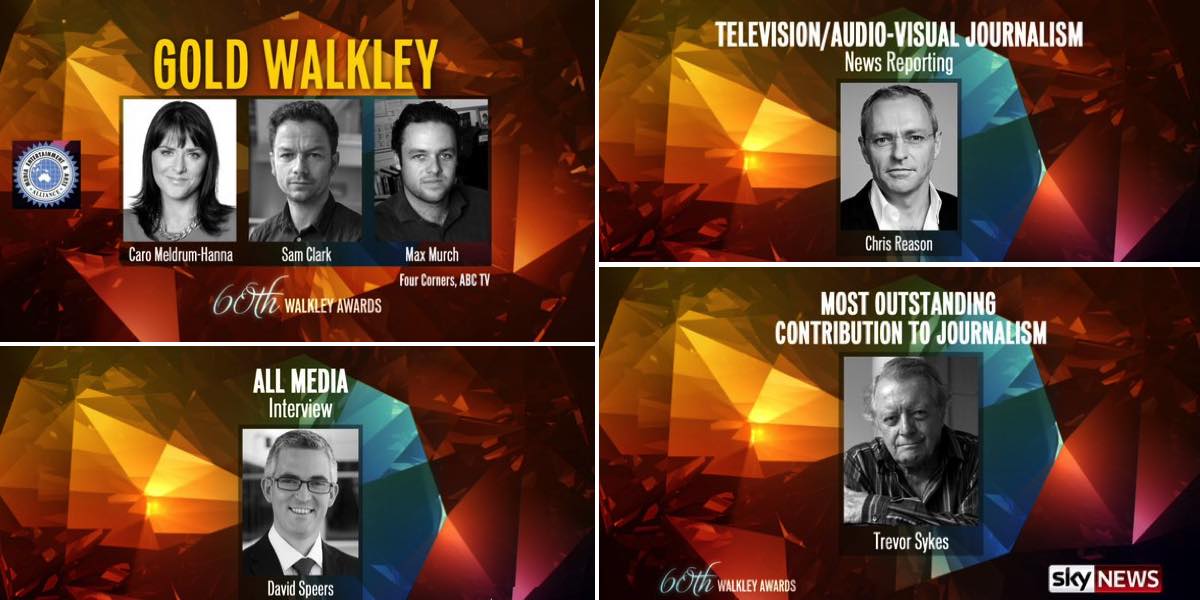 The Four Corners team of Caro Meldrum–Hanna, Sam Clark and Max Murch have won Australian journalism’s top honour – the Gold Walkley Award – for their courageous and extraordinary expose “Making a Killing,” which proved things were rotten in the greyhound racing industry in Australia.

The Four Corners team forensically analysed hundreds of hours of covert vision to piece together a picture of the extent of greyhound trainers’ involvement in the cruel and illegal practice of live baiting. They obtained remarkable interviews, including candid admissions from racing industry insiders.

The Walkley judges said: “’Making a Killing’ exposes greyhound racing’s ugly secret. It took bravery, tenacity and months of planning in three states to produce a jaw-dropping report that has shaken not just the greyhound code but the entire racing industry.”

At the end of her acceptance speech onstage at Crown last night, Caro Meldrum-Hanna said: “Grey hound racing – I’d get rid of it.”

Trevor Sykes was awarded the Walkley for Outstanding Contribution to Journalism, recognising his 50-year career as an insightful and relentless investigative financial journalist.

The Nikon-Walkley Press Photographer of the Year Award went to News Corp Australia’s Gary Ramage for his superb ability to cover the regular news beat as well as in-depth reporting. Ramage also took out Nikon-Walkley Photo of the Year.

Debi Marshall was lauded with the Walkley Award for Journalism Leadership for her ongoing courage and determination to get to the truth despite risks to her personal safety. The judges said nowhere was this more evident than during her investigation into the Family Court Murders.

Commenting on the Walkley judging process, Advisory Board Chair Kate McClymont said, “The judging process is what gives the Walkley Awards its credibility. The judges are senior journalists — people who know the skill, quick wit, depth of research and analysis, resourcefulness and even physical courage that it takes to create the best journalism.”

The 60th Walkley Awards for Excellence in Journalism were presented in 34 categories.

HEADLINE JOURNALISM
Sean Keeley, The Courier-Mail, “Jihad me at hello”, “Fillip for republicans” and “Voyage of the crammed”

SPORTS JOURNALISM
Chris Garry, Sunday Mail and The Courier-Mail, “When a Game Becomes Life and Death”

COMMENTARY, ANALYSIS, OPINION AND CRITIQUE
Peter Hartcher, The Sydney Morning Herald, “Come and get me”, “PM rolled by his own ministers” and “Abbott’s gamble with no safety net”