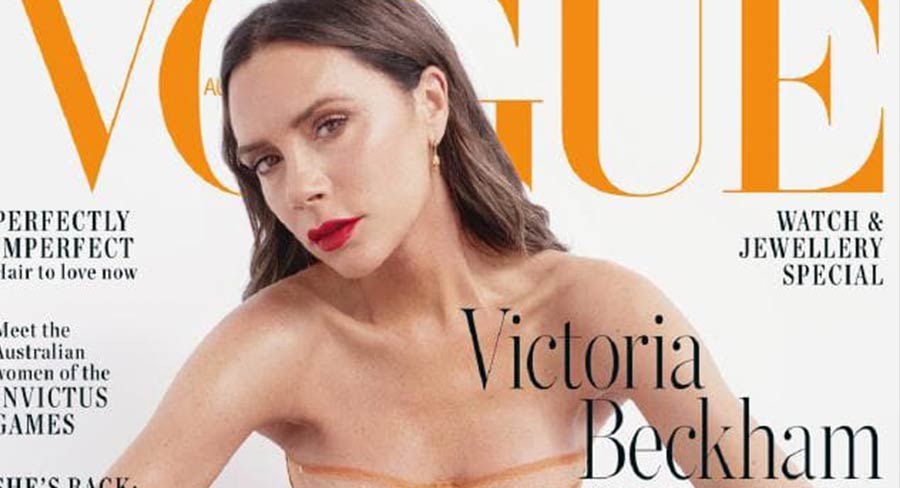 As Victoria Beckham celebrates the 10th anniversary of her own label, she is determined to look forward and go her own way.

Vogue Australia has published its cover story by Tim Blanks and every picture online from its November 2018 issue. Blanks is an editor-at-large at businesoffashion.com.

Here are some highlights:

In April 2008, the fashion world didn’t yet know what to make of Victoria Beckham. She had aspirations as a designer, but so did a dozen other celebrities eager to amortise their popular profiles. Then suddenly, surprisingly, she fronted the latest Juergen Teller-lensed campaign for Marc Jacobs, the unimpeachable crown prince of cool at the time. Teller shot her knees-up in a giant Marc bag, like she was… gasp!… making fun of her public image as pouty, flashy, fashion-obsessed Posh. Fast-forward a decade, Beckham’s back in the bag and Juergen Teller is once again the photographer. She has reclaimed and recreated that 2008 moment for herself. This time, it’s her advertising campaign, her name on the bag. And now the fashion world knows just who she is. In hindsight, they could have winkled out all sorts of insights from that original shoot for Marc Jacobs: her ambition and fearlessness, her insecurity and naivety and, above all, her sense of humour. That will keep anyone sane during the most trying of times, but it has stood her in particularly good stead. In my various encounters with Beckham over the years, I’ve always walked away wishing that the cynics and naysayers who’ve dogged her since the heady heights of the Spice Girls could see and appreciate how funny she is, although I doubt even the drollest droll would soften the most trolling trolls. In that, Beckham reminds me of Donatella Versace, another public figure who has weathered the slingshots and arrows of celebrity while managing to maintain a healthy, humorous perspective. Come to think of it, both women have adopted a similar survival strategy, a formidable public persona – Donatella the Blonde, Victoria the Glum – that armours them against the outside world and allows them to hide in public. Beckham is celebrating her 10th anniversary in business this year. “What I’ve accomplished within 10 years is far more than I could have dreamed,” she says. “I feel like I’ve been doing this a lifetime. I live and breathe this brand seven days a week: I never switch off, I never go on holiday and turn my phone or email off. This is my fifth child.”

A decade ago, Victoria Beckham the label consisted of three people in a studio in London’s Battersea, on the other side of the river. The first time she visited Net-A-Porter’s headquarters in West London, Beckham famously wondered why she couldn’t have all that for herself. All she had to do was work – and wait.

The anniversary year has seen spectacular developments: a new CEO, Paolo Riva; a new chairman, industry veteran Ralph Toledano; new investors; and a new HQ. It’s an impressive multistorey block in Hammersmith, four minutes by car from her home in Holland Park. “I have a parking space,” she marvels. The first time Beckham drove past the building with her children, they WOW-ed. A hundred people work inside, and she insists she knows each of them by name. “I work closely with everyone.”