It could be game on in the 7.30pm reality TV slot after some movement in the ratings on just the second day of the clash between the “veteran”, Seven’s My Kitchen Rules (eight seasons), and the relative newcomers – TEN’s I’m A Celebrity…Get Me Out Of Here (three seasons) and Nine’s Married At First Sight (four seasons).

The Chase and Seven News won their slots last night, with Seven News shaking up things in Sydney with a narrow win.

Home and Away was again over 800,000 as the bushfire battle continued.

My Kitchen Rules had its own version of a Tuesday tucker challenge where the judges and contestants had to digest one of the worst looking desserts you could imagine. The Green Tea Cream Donut with Chocolate Glaze and Matcha Affogato was quite rightly judged very severely by Feildel and Evans with scores of 2/10 and 1/10 respectively. That put the Tuesday cooks David and Betty at the bottom of the leaderboard.

The audience was down on the launch episode and YOY the episode two audience went from 1.53m to 1.19m. Another concern would be that in Melbourne MKR ranked #3 in its timeslot with 298,000, outrated narrowly by both Married At First Sight on 312,000 and I’m A Celebrity on 315,000.

Later in the night 800 Words returned to the schedule with 797,000. The seven episodes screened last year had an average consolidated metro audience of 984,000. 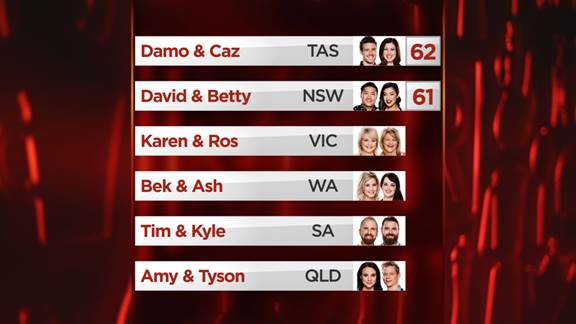 Nine’s big success last night was the lift in the audience for Married At First Sight which was up from its Monday numbers to 927,000. The show pushed its way into the top five and boasted a bigger national metro audience than the second half of Nine News at 6.30pm.

The tucker challenge on I’m A Celebrity couldn’t hold the same fascination that the show had for viewers on its first two nights. Special mention to Steve Price who scoffed down the horrors on offer faster than the My Kitchen Rules team was able to digest their dessert offering.

The broadcaster’s latest railway treasure is the 2016 British series Paul Merton’s Secret Stations. The first of the three episodes was the channel’s best last night with 268,000.