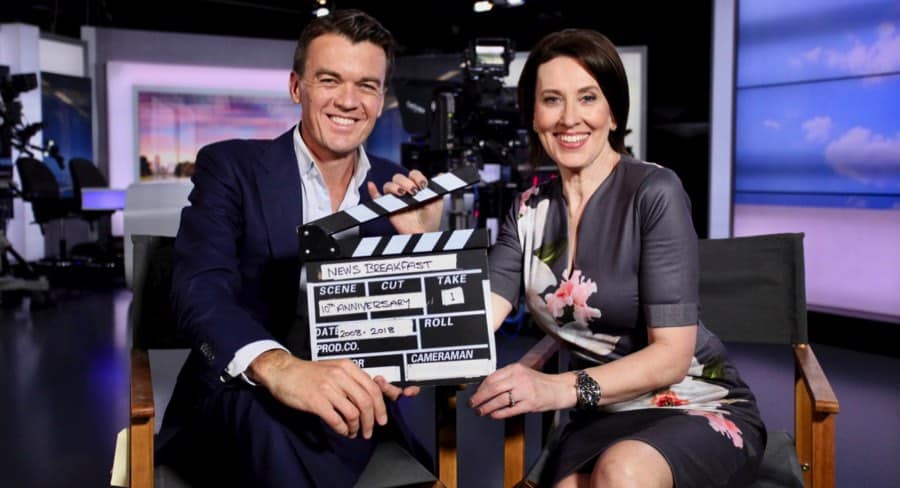 Presenter Michael Rowland on the anniversary and working with co-host Virginia Trioli.

It’s been 10 years since ABC’s News Breakfast first appeared on Australian TV. However, it is still a young show compared to its competitors in breakfast. This, according to News Breakfast host Michael Rowland, comes with its own challenges.

“Our numbers show that our audience has been growing year-on-year. That has certainly been the case in the last year, where Sunrise and Today have fallen,” Rowland told Mediaweek. “The thing with breakfast shows is that it takes a while to establish yourself. We shouldn’t forget that Today has been on-air for over 35 years and Sunrise has been on-air since the 1990s. Those were well established by the time we burst onto the scene.

“Ten years is a long period of time but in TV terms, compared to the other two, we are still very young.”

News Breakfast began in 2008. Rowland has been with the show since 2010. He replaced Joe O’Brien.

Rowland said the ABC breakfast show, which airs on ABC’s primary and news channel, is dramatically different now from what it was in 2010.

“We had a lack of resources back then,” Rowland said. “We definitely cover news but we also break it up with light and shade. There is more colour and we do more entertainment stories. We have the mix pretty much right now.”

While entertainment stories are important to News Breakfast’s lineup, the heart of the show is news and analysis. This has a big influence on the type of audience it attracts.

“In this era of fake news and lots of nonsense, they really trust the ABC News brand,” Rowland said. “That is a reason why people are switching to us. They want some serious news and they want a breakfast show that treats them intelligently.”

While Rowland isn’t a fan of the term chemistry to describe the rapport between presenters, he said it’s very important for them to gel. Rowland said this is something he and co-host Virginia Trioli have strengthened over the years.

“You can’t just plant two people, sit them on the one couch and expect the magic to happen from day one. You have to build a relationship with your co-presenter. That is what Virginia and I have done over the last eight years on News Breakfast.”

The partnership between the presenters has changed considerably since Rowland’s first day on the job. “I was like the bunny in the headlights, completely terrified of having to co-present three hours of breakfast TV. I am more comfortable now. That is a by-product of us getting to know each other very well. We often joke that we have an on-air marriage. We do 15 hours of live TV together – that is large chunk of anybody’s week.”

Being a breakfast presenter is different from presenting a straight news and current affairs program. The host has to be able to open up to the viewers. This was something Rowland initially found “challenging”.

“As a journalist who came up through the ABC where we learnt to stick to the facts and play it straight, I found it hard to break away from that persona. You have to show a lot of yourself as a breakfast TV presenter. I am more comfortable with it now,” he said. “Viewers like to know about and empathise with some of the daily challenges you have, like raising kids. They identify with you and aspects of your life, so it’s important to give a bit of yourself to the audience.”

“Anybody at the ABC who tells you ratings don’t matter is lying to you,” Rowland said. “You don’t want to be putting out a show that nobody watches. We are conscious of who watches, where they watch from and what time of the three-hour show they watch. We have been able to calibrate our segments accordingly.

“Australia has responded to that as shown in the ratings.”