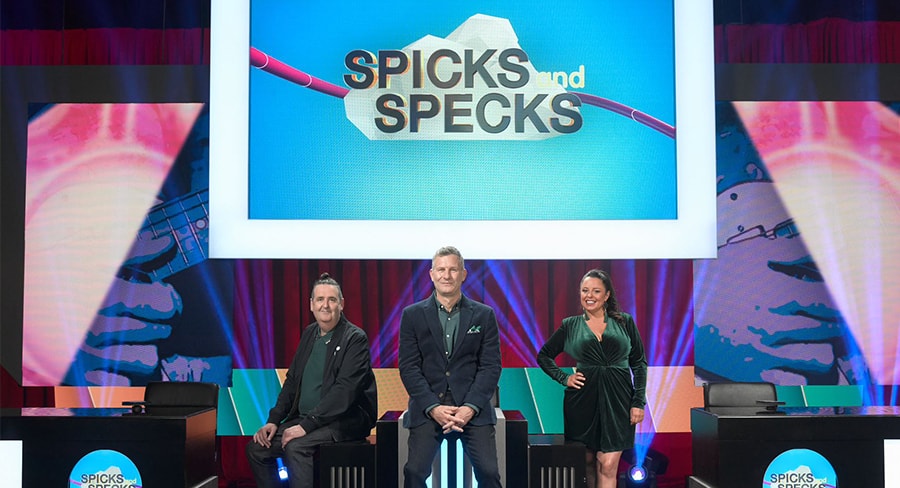 • “Some people made banana bread in lockdown. We made a new series of Spicks and Specks”

Spicks and Specks is making its return on the ABC and ABC iview from Sunday April 18. For the first time since 2014 there will be a full series, with ten episodes airing on Sunday nights at 7.40pm.

The original lineup of Adam Hills, Myf Warhurst, and Alan Brough will team up with some of Australia’s brightest music stars including The Teskey Brothers, Alice Skye, G-Flip, Vika and Linda, and Missy Higgins. There will also be a lineup of some of Australia’s most well known comedians including Anne Edmonds, Nazeem Hussain, Luke McGregor, and Spicks and Specks stalwarts Dave O’Neil and Denise Scott.

“Some people made banana bread in lockdown. We made a new series of Spicks and Specks. Not only did it give us all an excuse to get out of the house, it gave us a chance to showcase a new breed of Australian musicians and comedians, while also catching up with some old favourites. I’m so proud of the shows we made last year, and I can’t wait for the rest of Australia to see them” said Adam Hills.

Last year, Hills told The Green Room With Neil Griffiths podcast that there were plans to shoot a new ten-episode season and return to Australian televisions.

“I don’t think we’d ever do 40 [episodes] again. I think that just would take up too much time,” Hills said.

“There was talk of doing a series of ten at some point this year, but then I had to juggle that around The Last Leg and the Paralympics. And now, the Paralympics have been cancelled as well, or postponed, so there’s definitely a possibility [of more Spicks & Specks].”

Confirmation came in November 2020, when the ABC announced Hills, Warhurst and Brough would all return to their old positions. On Twitter, Warhurst confirmed that they were filming a full series instead of a one-off special.

Spicks and Specks will air Sundays at 7.40pm on ABC and ABC iview from 18 April.