SBS are now telling its stories about the seven billion people in the world in 360° video with the launch of their new VR app.

The new app, SBS On Demand VR, will be used to showcase  360° extensions of their TV content, along with additional VR content created by SBS and independent producers. The app has been timed to launch with their new documentary series Inside Heston’s World. The show, which shows Blumenthal’s move from the UK to Melbourne where he opened his Fat Duck restaurant, also has a VR component to it that gives viewers a behind the scenes tour of the Melbourne restaurant. 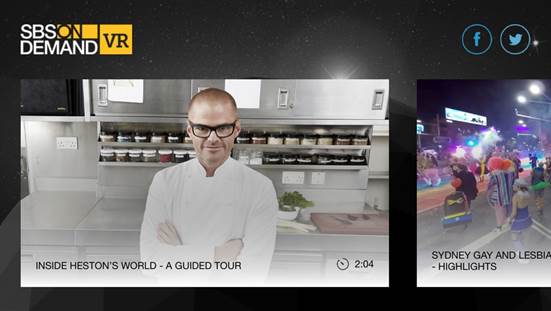 Developed by SBS’s Digital Creative Labs team, the VR app is part of SBS’s commitment to utilise the latest technology to tell diverse Australian stories in new and innovative ways.

The first VR project featured on the new app will complement Thursday night’s television premiere of SBS’s observational documentary series Inside Heston’s World – a 360° video of chef Heston Blumenthal giving viewers an exclusive behind the scenes tour of parts of The Fat Duck restaurant in Melbourne, the focus of the television series. Heston reports that 250,000 people registered to get a coveted seat at the restaurant. With only 14,000 seats available to diners in the six months that The Fat Duck was in residence, foodies across Australia – as well as the 236,000 curious fans out there starving for a look at what could have been – will now be able to get an extra glimpse inside.

Later in the year SBS will release on the app the second season of SBS documentary series Untold Australia as a VR series. Co-funded by Screen Queensland, Untold Australia VR will be a series of factual VR films exploring the diversity of Australia’s people, their cultures and lifestyles. Up to four films will be commissioned as part of the series, with filmmakers in Queensland invited to apply. These VR documentaries will utilise 360° video and/or computer-generated interactive media to create immersive stories.

SBS will also explore VR opportunities in its newsroom and is training camera operators and editors to produce VR content.

The SBS On Demand VR app is free to download and is available for Apple iOS and Google Android smartphones through the App Store and Google Play stores respectively.