For news junkies in Australia, getting subscription TV in the 1990s meant you could watch King’s daily CNN talk show

Larry King, the longtime CNN host who became an icon through his interviews with countless newsmakers and his sartorial sensibilities, has died. He was 87.

For news junkies in Australia, getting subscription TV in the 1990s meant you could watch King’s daily CNN talk show. It was required viewing for hearing directly from the biggest names in politics, business, sport and entertainment.

CNN on the weekend remembered the channel’s biggest name during its 40 years of broadcasting:

King hosted Larry King Live on CNN for over 25 years, interviewing presidential candidates, celebrities, athletes, movie stars and everyday people. He retired in 2010 after taping more than 6,000 episodes of the show.

A statement was posted on his verified Facebook account announcing his passing. His son, Chance, confirmed King’s death Saturday morning.

“With profound sadness, Ora Media announces the death of our co-founder, host and friend Larry King, who passed away this morning at age 87 at Cedars-Sinai Medical Centre in Los Angeles,” the statement said.

“For 63 years and across the platforms of radio, television and digital media, Larry’s many thousands of interviews, awards, and global acclaim stand as a testament to his unique and lasting talent as a broadcaster.”

The statement did not give a cause of death.

He battled a number of health problems

King had been hospitalized with Covid-19 in late December at Cedars-Sinai, a source close to the family said at the time.

He battled a number of health problems over the years, suffering several heart attacks. In 1987, he underwent quintuple bypass surgery, inspiring him to establish the Larry King Cardiac Foundation to provide assistance to those without insurance.

More recently, King revealed in 2017 that he had been diagnosed with lung cancer and successfully underwent surgery to treat it. He also underwent a procedure in 2019 to address angina.

King also suffered personal loss last year when two of his adult children died within weeks of each other: Andy King, 65, suffered a heart attack and daughter Chaia King, 52, died after being diagnosed with lung cancer. King is survived by three sons.

CNN founder Ted Turner, in a statement, said news of King’s death “felt like a punch to the gut”:

“Larry was one of my closest and dearest friends and, in my opinion, the world’s greatest broadcast journalist of all time,” he said. “If anyone asked me what are my greatest career achievements in life, one is the creation of CNN, and the other is hiring Larry King. Like so many who worked with and knew Larry, he was a consummate professional, an amazing mentor to many and a good friend to all. The world has lost a true legend.”

“We mourn the passing of our colleague Larry King,” he said in a statement.

“The scrappy young man from Brooklyn had a history-making career spanning radio and television. His curiosity about the world propelled his award-winning career in broadcasting, but it was his generosity of spirit that drew the world to him. We are so proud of the 25 years he spent with CNN, where his newsmaker interviews truly put the network on the international stage. From our CNN family to Larry’s, we send our thoughts and prayers, and a promise to carry on his curiosity for the world in our work.”

CNN noted how Larry King built an iconic career interviewing celebrities and newsmakers and many of them paid tribute to the broadcasting legend following his death.

Former President Bill Clinton said he was interviewed by King more than 20 times and remembered him as having “a great sense of humour and a genuine interest in people.”

Fellow CNN colleague Wolf Blitzer called King “an amazing interviewer and a mentor to so many of us.”

Fellow broadcasting legend Oprah Winfrey paid tribute, saying, “It was always a treat to sit at your table. And hear your stories.” 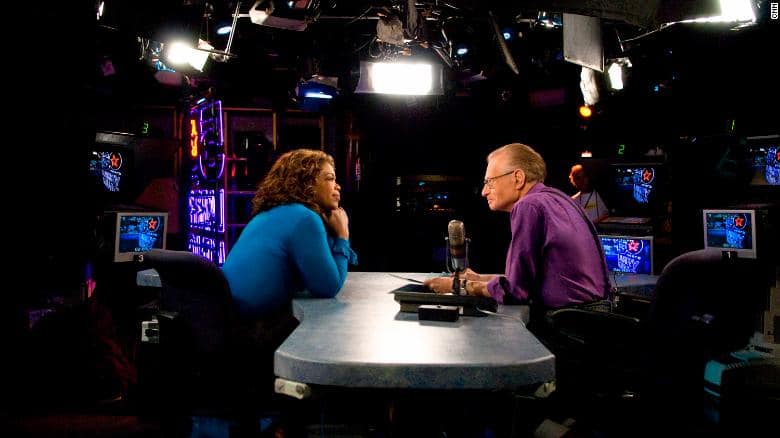 Oprah Winfrey being interviewed by Larry King on CNN’s Larry King Live
May 1, 2007

One of the many highlights over the years on Larry King Live was when comedian and the host of HBO’s Real Time with Bill Maher guested on his show. Maher posted on social media:

“I don’t usually post anything when someone dies, but Larry King touched my life in a big way. Dozens of times he gave me the whole hour on his CNN show when that show ruled smart TV. That time together with him is a great memory as are all the other times we spent. Great guy.”

CNN’s Anderson Cooper is on-air these days in King’s old timeslot of 6am Pacific/9pm eastern and he spoke on the phone to Wolf Blitzer about the man he explained was “unlike anyone else”.