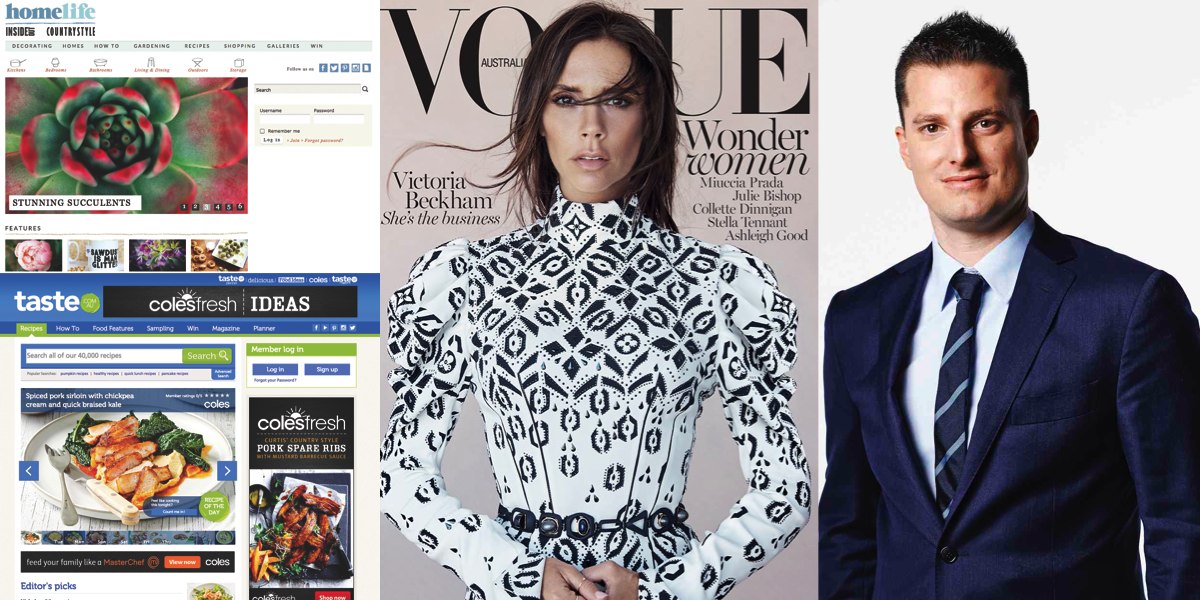 The shakeup means that the News Corp-owned lifestyle publisher will firmly take a specialised focus on three key areas – style, food and family and premium lifestyle. As mentioned by NewsLifeMedia CEO Nicole Sheffield at last week’s News Corp Upfront, the changed sales focus on content and owned media will be underpinned by deep data.

Under the continued direction of commercial director Sev Celik, national sales director Paul Blackburn (pictured) has been appointed to the role of director of sales and strategy. Additionally, sales and strategy directors have been appointed across key verticals – Nicole Bence for food and family, Milena Hopkins for premium living and Nicole Waudby for style. Both Bence and Hopkins are promoted internally from NewsLifeMedia, while Waudby joins the business from Bauer where she was group brand integration manager. Each will lead a specialised sales team within the publisher.

“There’s a definite shift
to a content-led, more integrated
approach.”

Speaking to Mediaweek, Blackburn said that the content-led approach was reflective of market demand. “We’ve just noticed more and more that it’s what advertisers are asking for. But also, we want to break into programmatic trading. It’s going to do a lot of the heavy lifting, but there is still a great role for content and commercial content that is produced by publishers like us on behalf of advertisers to tell a great story.

“Brand storytelling is a theme that’s been around for a very long time, but it’s not going anywhere. For us, particularly with the mobile device, we feel that telling a brand story via some great commercial content is where it’s at. It ends up being in the stream on the mobile device, rather than an ad execution. We’re quite excited about it, really. The only way to talk about great commercial content that is going to fit with our brand values and the advertiser’s brand values is to have an element of specialisation within those content categories,” Blackburn added.

While Blackburn declined to predict the anticipated revenue split between content-led advertising and more traditional dots and spots, he did note that both digital and content-led advertising was increasingly important to NewsLifeMedia, “There’s a definite shift to a content-led, more integrated approach. We’ve been doing it for the past three years, but now we’ve formalised it with our new approach. In terms of where we see things heading, it’s more about the fact that digital revenue makes up around 60% of our revenue now. You look at the SMI data around our magazines, they’re doing quite well comparaitively too. But we see this as what our brands have always been good at, which is creating content that connects with people.”

Under the new structure, Blackburn reiterated that the company and its clients’ focus will remain on the brand. “We’re very much a platform business, and that’s been key to our success over the last three years. Our advertisers like the fact that Edwina McCann isn’t the editor of Vogue magazine, she’s the editor of the Vogue platform. That’s the direction that we’re taking it – we start with an idea for a client and we fit it in across our platforms based on what the best way to execute that idea is.”

As such, print will remain a key part of the NLM offer.  “Print is still a very important part of that, but a lot of our stuff is socially and digitally led now.”

The changed structure will mean more ease and consistency for advertisers, he continued. “The key message for our advertising partners is that we have the team in place that will enable them to interact with one key contact for ease. But also, they have three specialists that can talk at a much deeper level about what we can do for them, in terms of leveraging our content, leveraging our brand support for their brand, etc.”

“The lessons that we’ve learnt in working with buyers for a while now is that they want to be connected to something. In a group sales operation you’re going from talking about kids with runny noses for Kidspot to couture fashion with Vogue. You can be having those conversations one hour after another. But this approach means that there’s an element of connection back to a brand, which is sometimes lost in a group sales operation. If you have a diverse portfolio like we do, you have to work really hard at knowing the individual brands.”

The move will also allow NewsLifeMedia to dig deeper into programmatic, he added. “We’re under no illusion that programmatic is coming, and we’d like to move forward because we believe that this new structure will allow us to have those conversations at a programmatic level.”