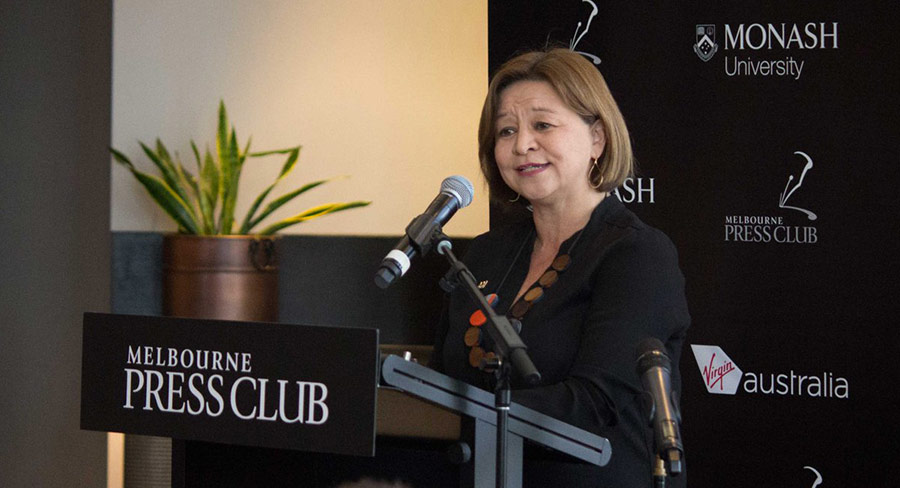 Michelle Guthrie asked to resign 12 days before her board sacking

ABC chairman Justin Milne and other members of the board including Kirstin Ferguson and Donny Walford were becoming increasingly frustrated by what they believed were her leadership failings, according to people familiar with the conversations.

Attendees at the annual Federal Parliamentary Press Gallery Ball in Canberra on September 12 noted Guthrie and Milne – who were seated at the same table with 7.30 chief political correspondent Laura Tingle and actor Sam Neill – barely exchanged a word.

The day after the Canberra ball, Milne formally asked her to resign.

Guthrie was then told she needed to go for three main reasons: low staff morale; her travel to Singapore [where her husband remained]; and poor feedback from executives working for her.

Two former executives spoke of a “toxic” executive environment and a supplanting of content executives, at Guthrie’s behest, by chief financial officer and head of strategy Louise Higgins and Helen Clifton, the chief digital and information officer brought across from TVNZ, reports The Australian’s Stephen Brook.

“Michelle clearly favoured and would do what Louise and Helen wanted. There was definitely a feeling of the content blokes and everyone else,” a former executive says. “They used to run the company and they don’t any more.”

Guthrie joins Geoffrey Whitehead and Jonathan Shier as short-lived ABC MDs. Whitehead resigned under pressure, replaced in 1986 by David Hill, who was ABC chairman, while Shier was terminated in 2001 after a disastrous reign and replaced by ABC executive Russell Balding.

Pitfalls of the infatuation with younger audiences and digital platforms

The pitfalls of the infatuation with younger audiences and digital platforms were nowhere more evident than in the launch of ABC Life in August, writes Fairfax Media’s Karl Quinn.

With its focus on food, sex and relationships, family and so on, this lifestyle-focused website lobs into an already crowded space in the market – and does so at the reported cost of 18 journalists, roughly the same number axed from ABC newsrooms earlier in the year as part of Michelle Guthrie’s investment in “digital strategy”.

In short, Guthrie was right to see the need for the ABC to engage a younger audience, and right to embrace the digital platforms she knows so well in a bid to reach them. But she was misguided in disregarding the concerns, needs and likes of its existing audience in chasing the chimera of this new one.

Audience renewal is a challenge for all legacy media. But throwing the baby boomer out with the bathwater is not the way to achieve it.

Justin Milne makes most contentious call, turns spotlight on himself

Justin Milne knows something about high level corporate politics. But in orchestrating the removal of ABC managing director Michelle Guthrie, he has made the most contentious call of his career, and put the spotlight on himself, reports Fairfax Media’s John McDuling.

“I don’t see myself as an interventionist chairman,” Milne, who did not respond to calls on Monday, told Fairfax Media in an interview back in 2017.

A high profile executive who has known Milne for decades describes him as “unbelievably ambitious”.

“It wouldn’t surprise me if he tries to do a David Hill,” this person said, referring to the former executive who served as both chairman and managing director of ABC. “He has enormous self-belief.”

Guthrie: ‘At no point have issues been raised about transformation’

In a statement on Monday, Michelle Guthrie said there was “no justification” for her removal, reports Fairfax Media’s Michael Koziol.

“I am devastated by the board’s decision to terminate my employment despite no claim of wrongdoing on my part,” she said.

“At no point have any issues been raised with me about the transformation being undertaken, the Investing in Audiences strategy and my effectiveness in delivering against that strategy.

“While my contract permits the board to terminate my appointment without cause and with immediate effect, I believe there is no justification for the board to trigger that termination clause. I am considering my legal options.”

Sources on both sides said there was a disagreement over the ABC’s approach to funding, reports The AFR’s Aaron Patrick.

Justin Milne and the board wanted to concentrate on Project Jetstream, a plan to centralise the ABC’s historical recordings and video footage that could cost up to $500 million.

Michelle Guthrie was “cynical” about the ability to pay for the plan, and was focused on the Coalition’s decision to freeze funding for three years at a cost of $84 million, board sources said.

“The first time I met her I thought she was very charming. She was clearly very smart. By the expiration of the first year it became clear she was only interested in a very small part of what the organisation did.

“She would not take on her role as a champion for this organisation. It’s an astonishing fail on her part.

“She was obsessed with platforms, structures, flowcharts,” he said. “Astonishing. Absolutely astonishing.”

Steve Price: ‘If they sack anyone at the ABC it should be Jon Faine’

Not everyone is a fan of Jon Faine.

“If they sack anyone from the ABC it should be Jon Faine,” commented Steve Price, hosting 2GB and 4BC breakfast this morning while Alan Jones is on leave.

Price then took calls from listeners complaining about left-wing bias at the broadcaster.

Luvvies rise up against non-anglo interloper.

So the ABC has fired an Asian woman because she didn’t get along with an old white guy.

And now she’s been turfed at the behest of a bloke who uses the phrase “going forward”.

Getting a grip on the turmoil inside the broadcaster was Adelaide’s #1 breakfast show:

“#1 on the ‘who gives a toss list’,” said David Penberthy to colleague Will Goodings on Fiveaa breakfast today.

“Journos love talking about themselves,” he added.

Newspaper editorials on departure of the ABC boss

The Daily Telegraph editorial: The ABC endures coup of its own

We look forward to future Four Corners coverage of any ABC conspiracy against the ABC’s managing director.

In this time of digital disruption, commercial operators – News Corp among them – invest, innovate and cut costs to find ways to make the business of knowledge sharing more relevant and sustainable. Yet through the ABC we see a government-funded behemoth creep into all opportunities, providing free content, risk-free. These issues are being explored by an Australian Competition & Consumer Commission digital platform inquiry. Regardless of debate on quality control and political bias, the ambitions of the ABC board in this area seem to have claimed the scalp of Guthrie. The ABC should focus on content rather than mission creep.