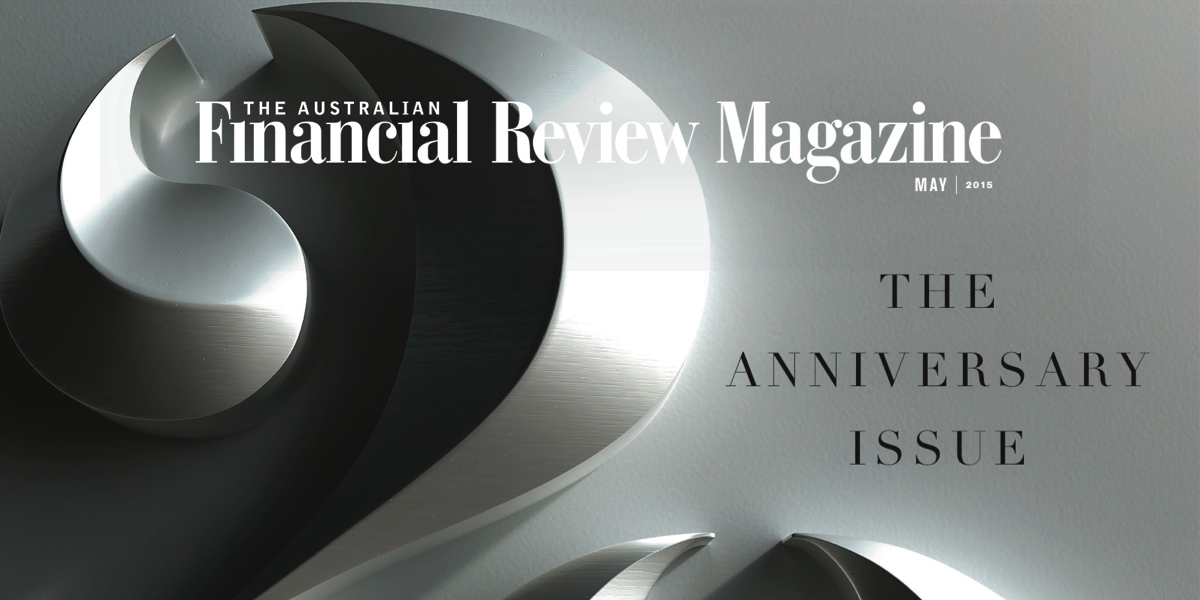 What’s in the 20th birthday edition of The AFR Magazine Editor Katrina Strickland told Mediaweek that when it began life, The AFR Magazine was Australia’s first and only monthly newspaper-inserted magazine. The title no longer holds that honour, but has another reason to celebrate – its 20-year anniversary, which the magazine celebrates with a collectors’ issue and a special dinner for advertisers hosted by Julie Bishop.

Within the mag, the celebrations continue with former editors William Fraser, Brook Turner, Kathy Bail, Stewart Hawkins and Jeni Porter joining Strickland in picking their favourite issues of their editorships. The retrospective theme continues throughout the issue, with Anne Hyland’s story on looking at the internet – what was then the new frontier.

Luke Slattery’s “Age of Nostalgia” examines our collective obsession with what once was, suggesting that our love for Bob Dylan and black and white films are a response to the fast pace at which technology is forcing us to live. Chris Sanderson has an interesting look at the similarities between baby boomers and Gen Y’s in their love of technology and gap years (at 17 or at 70). Miriam Cosic’s story about the politicians’ disregard for childless couples unfolds over an interesting three pages, looking at the relative political unimportance of that group and what the future might hold for them.

As well as looking back, The AFR Magazine makes some predictions about what the world might look like when it celebrates its 40th anniversary, suggesting the world economy will double in size, Singapore, India and China will all want sovereignty over the Australian-controlled Cocos Islands and 10% of the world’s cars will be self driving.

Australia’s new generation philanthropists – or, as Strickland refers to them on a call to Mediaweek, “the young and privileged” take six pages. Berry Liberman and her husband Danny Almagor, Lucy Mter, James Ostroburski, Hayley Morris, Markus Kahlbetzer and Prue Pateras all talk about their philanthropic work. “Our man in London”, James Chessell’s profile of Australian political string puller Lyton Crosby examines the role he will play in the upcoming British elections.

“Many Happy Returns”, a look at Australia’s best luxury lodges, is a testament to The AFR Magazine’s high-earning AB audience and makes for a great visual piece. “Lone Tree” is a beautiful, stark seven-page photo shoot comprising both men’s and women’s clothing, including a beautiful $20,000 Chanel dress.

The evolution of Australian cuisine across the last 20 years is also examined by Fairfax’s Jill DuPleix, with the trend away from risotto towards ramen apparent and the prevalence of dietary requirements from halal to ovo-lacto-vegetarian is given a wry once-over.  Simon Hughes also examines the changing way we consume content – from those old fashioned things called paperbacks to The Slap’s influence on Australian literature. The mag certainly isn’t stuck in the past though, with Fairfax’s Watch editor Bani McSpedden chatting to Jean-Claude Biver about the Apple Watch.

Digital: AFR subscribers can read content from the mag on http://www.afr.com/afr-magazine. @AFRMag has 314 followers on Twitter, while Strickland more than quadruples that with 1,707 on her personal account @katrinastrick.