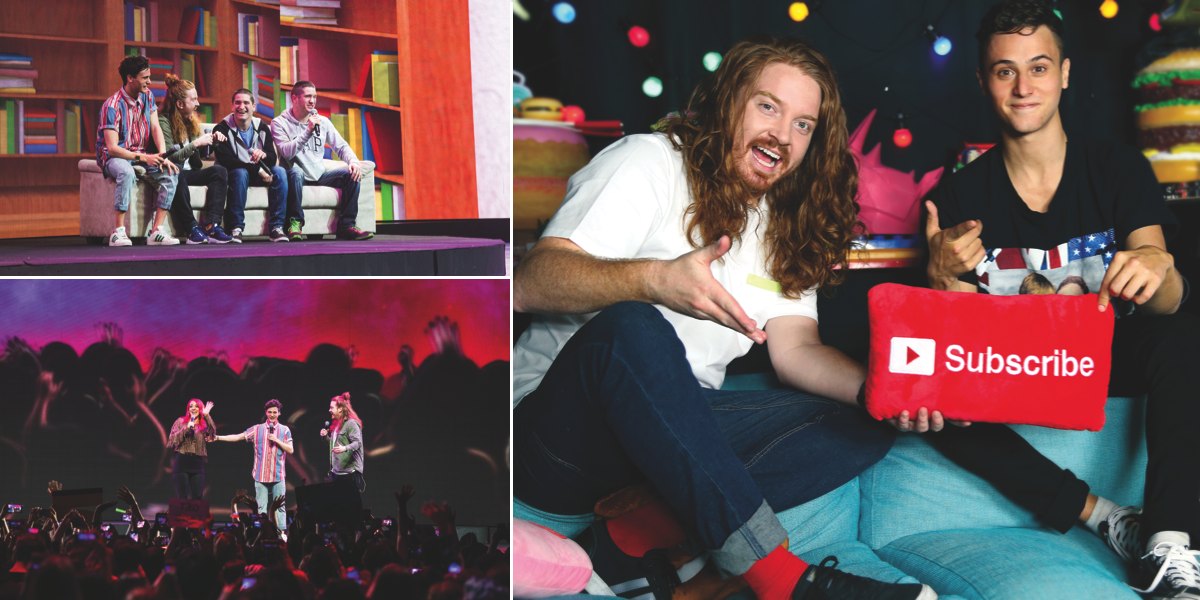 The presenters of SCA’s Hit Network national show YouTube Hits Michael Beveridge and Marty Smiley were at the heart of all the excitement and chaos as they hosted the event in front of a crowd of over 10,000 people.

“It was so loud, my ears are still ringing and it’s Monday [following the event],” Smiley told Mediaweek.

“There is a level of screaming that you think attached to One Direction and 5SOS,” added Beveridge.

Returning for the second time in two years, the lineup included some of the biggest national and international YouTubers including Jenna Marbles, Bethany Mota, ||Superwoman|| (Lilly Singh), Natalie Tran and Lauren Curtis.

“They are as real and as powerful as any other celebrities. If not more real and more powerful to target a demographic that big,” said Beveridge.

“I think Connor Franta and Troye Sivan have 10 times the power of George Clooney or Julia Roberts to a 17-year-old girl. It’s just about understanding the demo and understanding what interests different people.”

Just under six months ago, the Hit Network partnered with the global video platform to launch Australia’s first online video and radio show. The premise of the show is to cover all things YouTube. Beveridge credited this association for giving him and Smiley a platform like the YouTube Fanfest.

When asked about how they dealt with the nerves before taking the stage, the duo said it was all about keeping it concise and giving the audience what they wanted, the YouTubers.

“To be honest, we watched a bunch of Fanfests from the years gone by and the thing that became really obvious is there is so much negative comment about the hosts. We were terrified that if we stuffed up it was going to live on forever on YouTube,” shared Beveridge.

“I haven’t looked back at [the comments yet],” admitted Smiley. “I’ll do it later today.”

Talking about the highlights, Smiley shared: “[Michael] was doing a segment with Australia’s biggest beauty blogger who is Lauren Curtis – she has three million subscribers. She needed someone to walk through it with her so Michael was up there. He started by saying, ‘If you guys are wondering why there is a homeless-looking man on stage, then you guys don’t know how I get these eyebrows.’ She pretty much tutored Michael on how to get your eyebrows on sleek.”

“Then I forgot to be in the crowd to capture questions,” Smiley continued.

“He was just backstage,” scoffed Beveridge.

“I was tweeting,” Smiley chuckled.

“You have to look at Channel 7’s Cats Make You Laugh Out Loud, which was essentially a 30-minute YouTube video, and that beat out anything on the night in the ratings,” Beveridge pointed out.

“Any traditional media company that doesn’t embrace YouTube is probably embracing their own demise.

“These kids are really talented even if you don’t think so, and you’d better get across them and their market.

“Traditional media is afraid of YouTube but we know we need to connect with them so that’s what we’ve done.

Since launching in May 2015, YouTube Hits has garnered over 425,000 channel views and more than 4,000 subscribers on the video sharing platform.

“We are rewriting the rules of radio by putting some segments to air that aren’t necessarily perfect for radio but they still sound funny because people are trying to work out what’s going on [by] thinking about it as a YouTube video,” explained Smiley.

“It’s hard to make a radio show, where every idea we make has to work on radio and YouTube.”

“It’s all about Marty and me playing second strength to content creators,” added Beveridge.

Having worked in breakfast in Adelaide, Beveridge said the late nighttime slot of the show is a perfect fit.

“With 10pm to midnight on weekdays, you really get to have more fun. That’s the attitude with Marty and me with YouTube Hits, but we don’t have to be so careful. It’s a perfect development show timeslot,” he said.

On the future show, Smiley said that it will act as a string between the content creators on YouTube and their viewers.

“It’s going to be a show that lives on for a long time because if you have a look at the numbers [a TV show gets] and the [number of] subscribers [YouTubers have], a good night in television in Australia is 1-1.2 million. These guys [the YouTubers] are getting that every day easily, times 10, with none of the budgets and a more targeted demographic.”