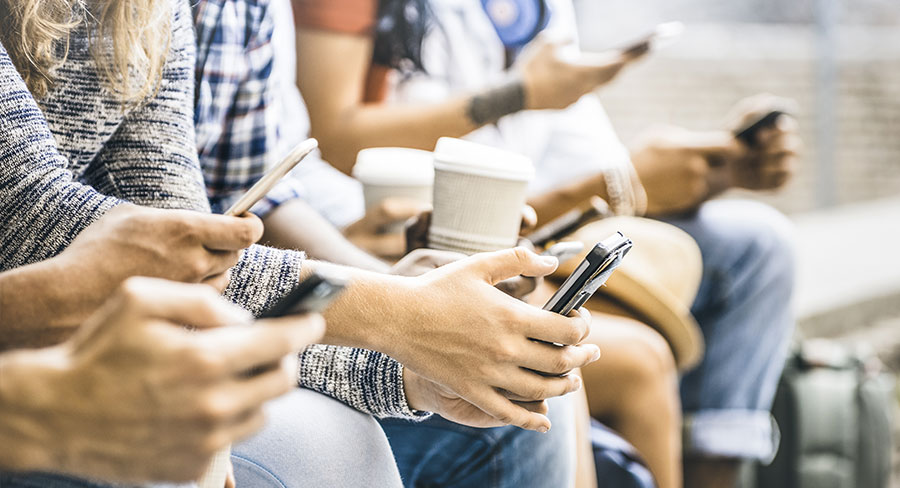 • For 2020, the report forecasts a slight acceleration on an underlying basis

GroupM, WPP’s media investment group, has released its Worldwide Media Forecast, This Year, Next Year, which predicts growth of the advertising industry across more than 60 territories through the end of 2019 and into 2020.

Most notably, GroupM forecasts +3.4% growth in 2019, or +4.6% on an underlying basis (which excludes political advertising in the United States).

For 2020, the report forecasts a slight acceleration on an underlying basis, with a forecast of +4.7% growth. Adding in political advertising in the United States, total global growth will be more like +6.0%. Globally, the US is a key driver of the industry’s ongoing expansion, but so too are China, Brazil, India and the UK. Digital advertising continues to be the largest growth medium across markets.

“While the economic foundations supporting the advertising industry are somewhat fragile at this time, growth trends are holding up for now,” said Brian Wieser, global president of business intelligence, GroupM.

Notable trends: The US, China, Brazil, India and UK lead the pack

Looking at significant contributors to overall global growth, the US, China, Brazil, India and the UK collectively account for well over half of growth in 2019 and 2020.

China, which represents one-sixth of global advertising, expects +5.6% growth in 2020. Brazil also stands out for its reversal from a -0.9% predicted decline in 2019 to a +6.1% gain in 2020, despite mixed conditions for its overall economy. India expects double-digit growth in 2019 (+14%) and 2020 (+13%), making it set to surpass Australia and Canada by next year as the world’s eighth-largest ad market. As for the UK, growth of more than +6.1% this year, and +4.6% next, makes the world’s fourth-largest ad market one of the healthiest despite the uncertainties surrounding Brexit.

Digital is Unstoppable But Deceleration is Evident 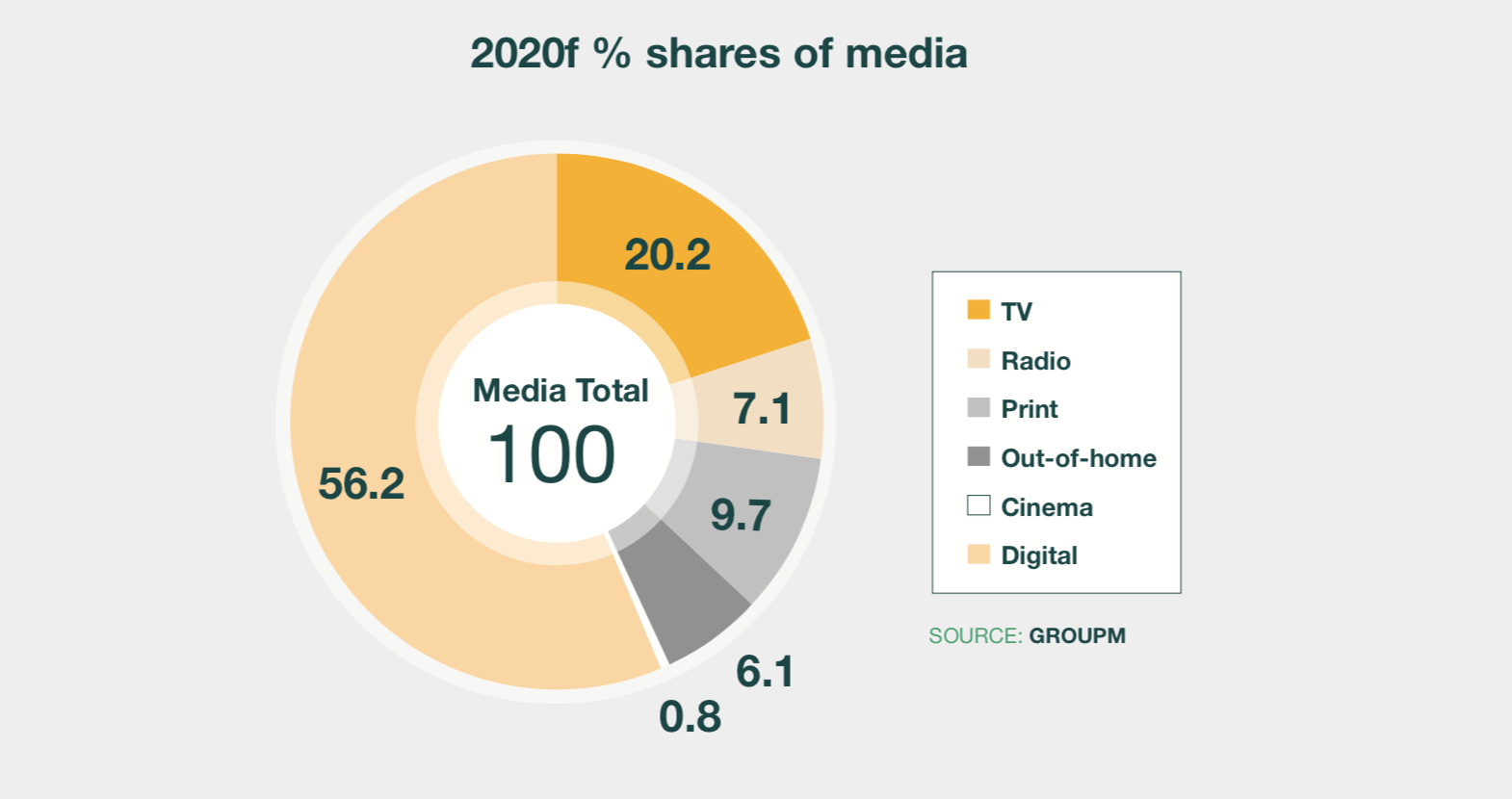 Unsurprisingly, internet related activity dominates the global advertising marketplace, capturing 50% of the world’s advertising spending in 2020, double its 25% share from 2014. However, as digital media continues to mature, GroupM predicts its share of spending will eventually plateau. As a result, growth will ultimately decelerate with each passing year to eventually converge with global averages. 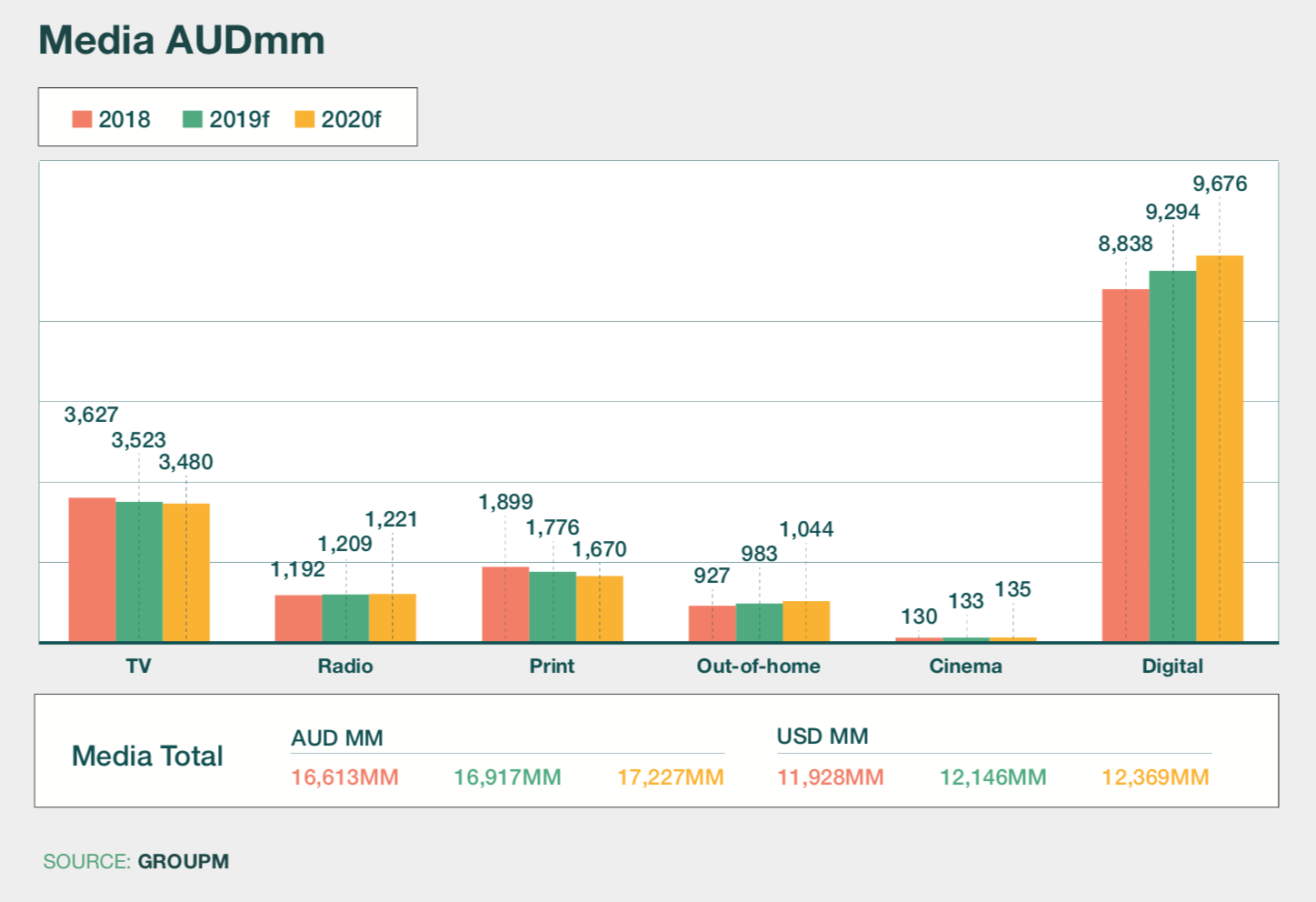 Television, set to account for 30% of advertising in 2020, has lost share over time as growth has essentially flattened. Worldwide, GroupM expects the medium to fall -3.0% in 2019 before rising in 2020 by +1.5%. This volatility is primarily due to activity in the United States, which represents 36% of the world’s total TV advertising, also heavily impacted by political advertising. Conversely, and unsurprisingly, newspapers are set to decline again in 2019 and 2020, down -9.3% and -5.8% respectively, amounting to only $38 billion in ad revenue. Newspapers represent 6.0% of the world’s total advertising, down from 34% 20 years ago.

The market was buoyant in the first half of 2018 (+7.2%), driven by increased spending across the Top 10 categories. However, growth throughout the second half of 2018 declined to +3.6%, delivering an overall final annual position of +5.3%. The two biggest spending categories, automotive and retail, showed record pre-Christmas spends, delivering double-digit growth in Q4.

However, the decrease in consumer and business confidence has resulted in a soft start to 2019, not helped by the hard comparable of the 2018 Winter Olympics. The largest category, automotive, is expected to decrease as new car sales decline due to economic uncertainty. Uncertainty is also affecting spending in retail supermarkets, food and restaurants. However, the federal election and Tokyo Olympics will stimulate the market in 2019 and 2020, respectively.

While growth is still anticipated, the demand outlook forecast has contracted given the economic uncertainty both globally and locally.

Linear television networks have confronted the increased competition from global VOD providers by investing in automated technology. The average Australian home has more than six screens. With viewing fragmenting across devices, the industry has supported changes in measurement to deliver cross-screen viewing estimates to deliver advertisers true incremental reach figures.

Out-of-home is one of the biggest growth channels. It returned 10.8% growth in 2018, with good momentum expected to continue due to innovation in areas such as geolocation and targeting by facial or car recognition or real-time traffic data. The medium has seen significant recent consolidation, fuelling investment in data capabilities and digital inventory. Digital now represents 51% of all outdoor bookings.

Radio is expected to continue to expand by adding social content, talent and podcasts. All major radio networks are investing significantly in their podcast operations.

While actual print publications decreased by 10% in 2018, news organisations responded to consumer needs with digital news media increasing by 8.7% YOY. This trend will continue as publishers focus on their core attributes and the strength of their brands and premium content to remain relevant and viable. National titles are successfully monetising their subscriptions and internal restructures are delivering quality cross- platform campaign solutions including social and video to clients