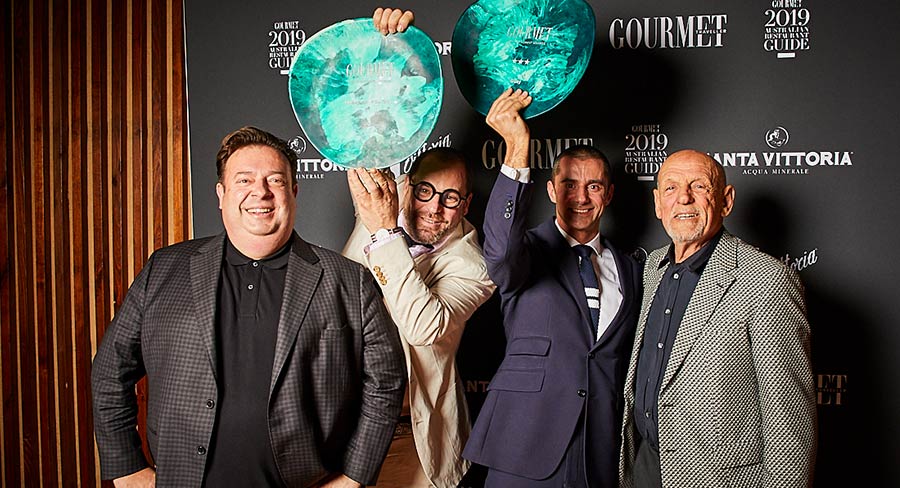 The nation’s best place to eat was revealed last at the Oscars of the Australian food world, the Gourmet Traveller Restaurant Awards. Taking out the top spot, the recently re-opened Quay in Sydney has been named Australia’s Restaurant of the Year in the country’s longest-standing national restaurant awards.

Josh Niland of Saint Peter in Sydney took out the peer-voted Chef of the Year, a remarkable turnaround hot on the heels of winning the Best New Talent award only 12 months before.

The well-dressed team at Dinner by Heston Blumenthal took out a collective win for Maître d’ of the Year, and Emma Farrelly, who oversees not one but four lists at Perth’s State Buildings complex, won Sommelier of the Year.

Regional winners: In addition to Ali Currey-Voumard, of The Agrarian Kitchen Eatery in Tasmania’s New Norfolk, winning Best New Talent, many regional establishments trumped their city cousins, including Laura, the glam eatery in a winery sculpture-park on the Mornington Peninsula that was named New Restaurant of the Year, and the awards’ first ever regional Bar of the Year, Liberté, which at five hours’ drive south of Perth, is about as regional as a bar gets.

On top of this, Brae, in the Otways of Victoria, won Regional Restaurant of the Year and scored three stars to boot.

“Excellence is not something that’s in short supply in Australian hospitality right now,” said GT editor Sarah Oakes, “so it’s an incredibly challenging process to choose winners in a pool of talent that is so deep.”

“We’re incredibly fortunate at Gourmet Traveller to have such a wealth of exciting talent and great adventures to share with our readers,” said chief critic Pat Nourse. “This country punches so far above its weight – it’s fantastic.”

Details of the winners are in the September issue of Gourmet Traveller, on newsstands with the new edition of the Gourmet Traveller Australian Restaurant Guide, presented in association with Vittoria Coffee, and supporting sponsors Ilve, Mutti and Harrolds, on Thursday August 23. The full list of winners follows.

RESTAURANT OF THE YEAR
• Quay, Sydney

MAÎTRE D’ OF THE YEAR
• The team from Dinner by Heston Blumenthal, Melbourne