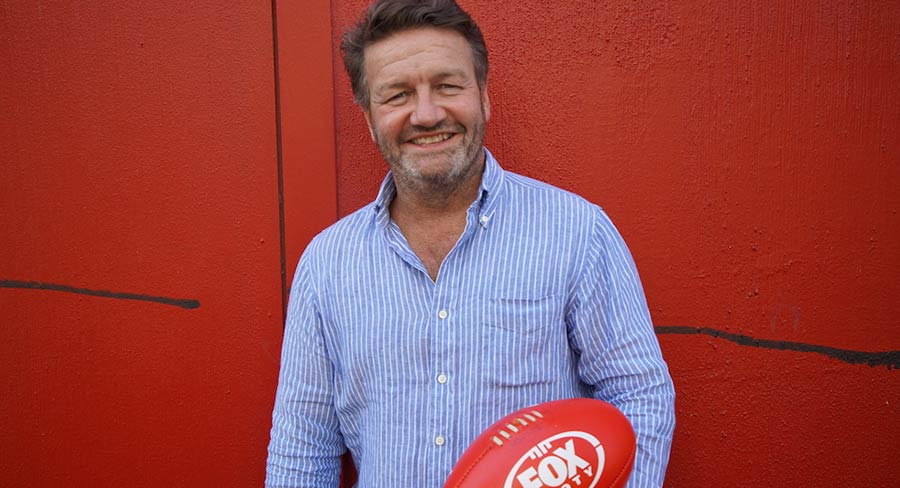 • Another gig for Australia’s busiest comedian – Up The Guts

In addition to its coverage of every AFL game in 2019 except the Grand Final, Foxtel’s Fox Footy Channel has commissioned a new show, Up The Guts, joining its suite of comedy shows of The Beep Test and Bounce.

Comedian Lawrence Mooney will host Up The Guts, the new late night Friday show on Fox Footy. The “comedy genius” will bring the laughs in the post-game live television show which will feature a live studio audience, following on from Friday Night Footy.

“Any AFL fan knows exactly what Up The Guts means – I’m wondering what the rest of the world imagines this show is about,” Mooney said when announcing the new show name.

Fellow comedian and Nova 100 Melbourne breakfast anchor Dean Thomas will contribute to the laughs, with a revolving third guest to join Mooney each week.

For the first time, Fox Footy will produce 46 games for Foxtel throughout the 2019 season in 4K Ultra HD.

For AFL fans the 4K Ultra HD revolution kicks off on Saturday March 23 as Melbourne host Port Adelaide at the MCG; and then on Sunday, March 24 St Kilda play the Gold Coast Suns at Marvel Stadium.

Newcomers turned television pundits Nick Riewoldt and Bob Murphy will continue to dominate on Wednesday nights after impressing AFL 360 hosts Gerard Whateley and Mark Robinson in 2018 during their first year. On The Couch returns on Mondays after AFL 360 with its star-studded team lead by Gerard Healy and Garry Lyon. Jonathan Brown and Paul Roos complete the team and are looking forward to dissecting the weekend’s games and the week of footy ahead.

Mike Sheahan returns for another season of Open Mike on Tuesday evenings. The doyen of footy media kicks-off his season with a conversation with Australian broadcast icon Sandy Roberts, who this year retired from television commentary following a distinguished career spanning 46 years.

Mid-year, Sheahan hands the interview-baton over to Bob Murphy, who will tackle his second season of Bob. The former Western Bulldogs captain chats with his former State of Origin teammate Brendan Fevola for a captivating first episode, before Sheahan returns in July to cap off the season.

In 2019 On The Mark will continue to provide a different look at footy and those close to the game with in-depth, revealing interviews. Sarah Jones will host the discussion program focusing on the personal side of the game.

Comedian Dave Thornton is back to host Australia’s number one comedy footy quiz show, The Beep Test, alongside fellow team captain Lawrence Mooney. The half hour of footy trivia, nostalgia and entertainment, will showcase the game’s most famous fans as they compete to take home the Robbo Cup each Sunday night.

Hosted by Dermott Brereton and Brad Johnson, Saturday Stretch welcomes Sarah Olle to the Saturday night team. The trio will provide the best wrap of the biggest day in footy. The program will feature discussion around the biggest talking points from up to five games every Saturday and live crosses to the evening games, media conferences, and interviews to keep viewers up-to-date.

Jason Dunstall will help round-out the weekend of footy with family-favourite Bounce. Danny Frawley, Cameron Mooney, AFLW debutant Sharni Layton and Andrew Gaze will bring the belly laughs as they showcase their physical and mental abilities in the popular Yesterday’s Heroes segment.

Head of Fox Sports Peter Campbell said: “Just like every AFL team we’ve being working hard over the summer to be match fit for when the season finally kicks off this Thursday. And just like the players, all of us at Fox Footy and Foxtel are filled with anticipation, excitement and expectation of the season ahead and what is about to unfold.

“Foxtel is also excited to be broadcast for the first time 46 games during the 2019 premiership season in 4K Ultra HD, providing AFL fans with a compelling proposition to watch games like never before.”