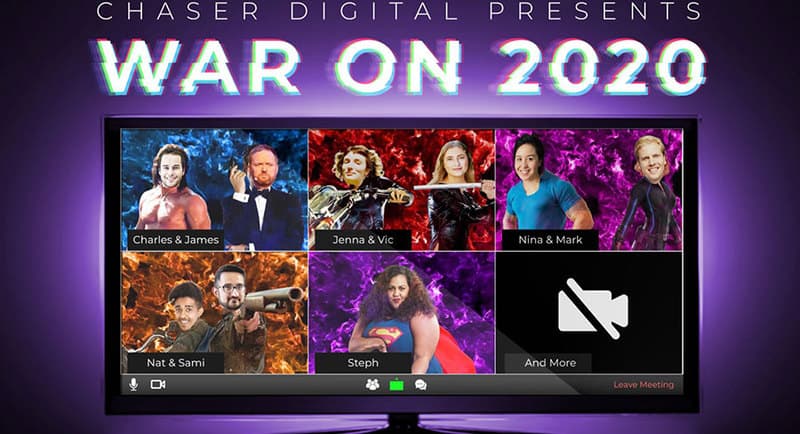 Chaser Digital has announced a new sketch comedy series to premiere on The Chaser’s digital platforms this December in conjunction with Australia’s other satirical juggernaut The Shovel (yes it’s a satirical cartel, yes the ACCC have been notified).

Dubbed The War on 2020, it features an all-stars line up of the best satirical comedians in the country, directed by Jenna Owen and Victoria Zerbst (SBS The Feed), and written and performed by Mark Humphries (ABC 7.30), Nina Oyama (Utopia), Sami Shah (ABC Radio), Steph Tisdell (Deadly Funny), Nat Damena (SBS The Feed) and James Schloeffel (The Shovel). The series will also utilise the writing talents of Evan Williams and Rebecca Shaw.

It will be produced by Charles Firth (The Chaser) and DOPed by Chloe Angelo (At Home Alone Together).

Executive producer Firth said, “Everyone knows 2020 was the worst year ever, and so what better way to send it off than with a withering takedown by Australia’s top scientists and medical professionals. Unfortunately, none of them were available, so instead we’ve hired a whole lot of satirists to dress up as scientists and doctors, which is good because they’re much cheaper.”

War on 2020 is a series of 13 sketches about the year that will be distributed online. Firth said, “The demand for content that pours shit on 2020 is so immense that I’m pretty sure the NBN will collapse the moment we release the first video. We got Josh Frydenberg to help us work out our download numbers and he reckons 60 billion Australians will watch each video.”

War on 2020 started life as a live stage show, which Jenna, Vic, Mark, James and Charles have been touring nationally since 2017. “This year, we moved it online because of the coronavirus,” said Firth. “And in the process, we expanded the writer/performers even though it’s been a really boring year and nothing much has happened.”

The Shovel’s James Schloeffel said there were two big stories for 2020: “In 2020 we lived through two of the most traumatic events in living memory: the shocking bushfires in Australia and the release of Gwyneth Paltrow’s vagina-scented candle. Thank God the year is almost over”.

“The low point of the year was the launch of COVIDSafe – definitely the least effective dating app of 2020,” said co-director Victoria Zerbst.

“War on 2020 will be a great way for people to relive the year they’d rather forget,” said co-director Jenna Owen.

“It’s a great way to remember all the things about 2020 that you’d only just managed to repress,” said Mark Humphries.

War on 2020 has received principal production funding from Screen Australia and will be released online through social media and on the Chaser and Shovel sites throughout December.

There will also be two ticketed live Zoom performances of the show on 11th & 12th December. Tickets to that show can be bought at www.chaser.com.au/live and www.theshovel.com.au/live