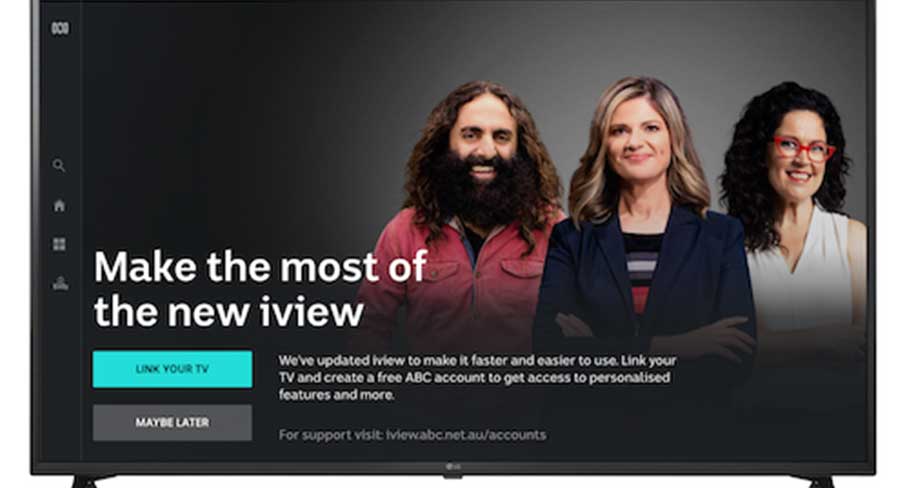 The ABC has released a fully rebuilt and redesigned ABC iview app for modern TVs and large screen devices.

The updated app provides a cleaner and more accessible interface, with login to bring rich personalisation features and program previews to help audiences find the latest releases of their favourite ABC content and discover new and original programming.

Alongside multiple platform improvements, the updated app has adaptive video streaming. This means higher quality streams are more reliable over slower network connections, resulting in a better, more consistent viewing experience and offering audiences across Australia access to the ABC iview app via a variety of ways – whenever and however they want, and wherever they are.

The updated app is available on:

It will soon be coming to HbbTV/FreeviewPlus devices, PlayStation 4 and Xbox One.

Other key improvements include:

Audiences can now link their TV to their ABC Account and have these features synchronised across multiple devices, including Smart TV, connected TV, desktops, smartphone and tablet devices.

ABC’s chief digital & information officer Helen Clifton said: “This is a fantastic piece of teamwork. We’re continuing to strengthen the foundations for ABC iview and enhance our audience’s experience. Out of this work has come a raft of exciting new functionality such as adaptive streaming, watchlists and login on any device so users can watch ABC content from where they left off – all made available to a large proportion of our ABC iview audience.

“It means another innovative step forward for the ABC and makes our outstanding and distinctive content even more accessible to audiences.”