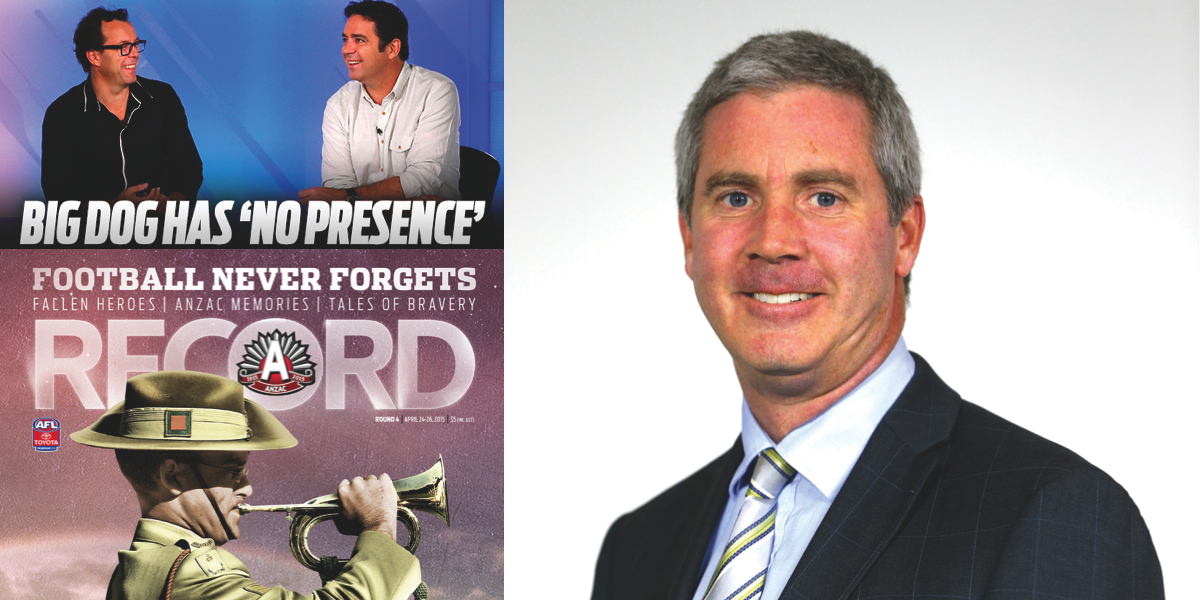 After a 13-year career at Foxtel looking after sports rights, Peter Campbell (right) moved from Sydney to Melbourne to become general manager of AFL Media two years ago. The division had been built over a number of years, but like many major sporting bodies, in recent times it ramped up its content offering to the fans.

Before Campbell’s arrival the AFL looked after some of its own media and either licensed out other parts or was involved in JVs. “Andrew Demetriou and Gillon McLachlan [past and present AFL chief executives] had a view several years ago that they wanted to bring a lot of third-party licensed functions in house. Subject to a successful negotiation with Telstra, which had the digital rights, the AFL wanted to supply content to the digital assets they had – things like vision and editorial.”

Telstra hosts the AFL.com.au website and is the current digital rights holder. “What the AFL and Telstra agreed to was the AFL setting up a content arm within the AFL to support the live matches that Telstra carries under its rights agreement.”

Many in the media were wary of the AFL building a content business to compete with what had become a very important audience driver for the media sector. “There was initial scepticism about the AFL running an editorial division,” explained Campbell who took control after the editorial division had been launched. “I was charged with bringing it together in a cohesive fashion and directing it as a true business serving the football consumer and making sure we provided our supporters with as much information about the AFL and Australian Rules Football as we possibly could. That includes everything from how do people buy club memberships, match tickets, to when and where the games are on.

“We have made some great inroads in terms of being able to deliver some great content to supporters. One of the things a digital environment offers is that we are just another voice offering information about the game. There has been a huge explosion of information for supporters.”

When asked about judging the success of the division, the amount of digital traffic suggests they must be doing a pretty good job.

Speaking about revenues, Campbell said: “Last year we were up on all of our revenue targets and this year we are tracking pretty well to budget.”

So as not to clash with TV rights holders Seven and Foxtel, AFL.com.au runs only extended video highlights. “Telstra is allowed to sell a live streaming product on mobile devices. That all happens now with the AFL Live App.”

All content on the website is on-demand and there are no plans to start a broadcast channel. “The content is there for the audience when they want to consume it,” said Campbell. “We do try to ensure though that our news is available every day at 4pm. We also try and make sure our Monday morning review show Access All Areas with Garry Lyon and Damian Barrett is available by 10am. We build regular times into the schedule, but running it as a TV channel is not our place. That is something Fox Footy does very well.”

Campbell was a sports rights negotiator for Foxtel during his time there from AFL to Olympics and Commonwealth Games. He now sits on the other side of the table at the AFL. But he fully appreciates what the current rights holders do for the game.

“Seven’s broadcast to a mass population is still a fantastic way for our game to get into the lounge rooms of millions of Australians. Fox Footy’s coverage is also fantastic. Added to that are the mobile rights Telstra has which is what many people now also want. We are lucky we have those partners covering all those platforms.”

Campbell’s previous boss at Foxtel, Kim Williams, is now on the AFL board giving the AFL a very strong negotiating team. “It’s a sport that attracts great interest on the commercial front. The AFL will ensure the game is made available to as wide a possible audience as we can,” noted Campbell, not wishing to provide any more detail about how the rights negotiations will be run.

Campbell’s current boss Gill McLachlan wants to get the broadcasts rights negotiations over this year, but that doesn’t always happen.

Campbell remembered: “I was at Foxtel in 2007 when we signed the deal two weeks before the NAB Challenge started.” The deal for those five years was nearly closed on Christmas Eve 2005 with the Nine Network and Foxtel the highest bidders. Seven in partnership with Ten then exercised a clause to match that offer early in 2005. Foxtel didn’t agree to their part of that rights deal until nearly a year later.

The growing audience of people who listen to radio on their smartphones is not able to listen to the AFL games via the radio station apps as the AFL make broadcasters stream matches via the AFL app. However there is a delay which means it is not much fun streaming at the match or at home to replace the TV audio. “Cricket has the same challenge. The moment you put that audio stream through the app there is a delay between three and seven seconds. We are trying to find the best possible solution because that sort of delay is not acceptable.”

Straight after the AFL Grand Final the new season starts again with trade period in October which runs into the AFL draft in November. Campbell: “This period gives people a sense of where their team is headed for the new season. We go very hard in that period with news and information through the hope and renewal phase for all the clubs. The next focus is then the NAB challenge which usually starts in February. The season starts as soon as the Australian Open tennis finishes.

“With the start of the home and away rounds this year we did over 4m unique visitors in round one. We only achieved that once before during round 23 last year.”
The AFL website is never short of ideas to draw audience. It’s more constrained by the number of the hours in the day! One recent video success was comparing past players from the same era and asking who was best. Everything is free on the site with the exception of the Live Pass to watch live games.